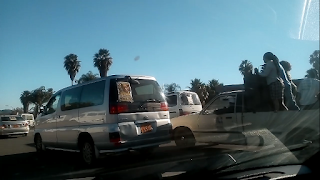 Zanu PF youths and their vehicles parading through the streets

28 June 2017 - MASVINGO – Business came to a standstill in the Central Business District (CBD) of Masvingo town as dozens of Zanu PF youth today (Wednesday June 28) blocked all the main roads as they paraded, showed off luxury cars belonging to party bigwigs and marched along Robert Mugabe Road into Masvingo-Beitbridge highways announcing President Robert Mugabe's Youth Interface Rally to be held at Mucheke Stadium this Friday.
The Zanu PF youth, who had no police escort, blocked the whole road with others signaling motorists from opposite directions to clear the road and allow free passage in a manner that roads are cleared when the President himself is passing through.
The march was a show of force and preparedness ahead of the much publicised visit by President Mugabe for the third leg of his 'Youth Interface' meetings.
Acting provincial police spokesperson Assistant Inspector Kudakwashe Dhewa could not shed light on whether the youths had sought clearance and an escort; referring all questions to national police headquarters in Harare.
"I can't give comment on that. It is a matter of policy so please call our Harare office," Assistant Inspector Dhewa said.
The Public Order and Security Act (Posa) dictates that all marches be cleared by the police and the police also reserves the right to assess the situation and determine whether an escort is needed or not.
During the march, it was youth leaders who assumed the duty of police officers; clearing traffic ahead of the marchers.
Zanu PF deputy provincial youth chairperson Brian Munyoro said they had a clearance and made it clear the programme will continue tomorrow.
"Yes we have a clearance. All our papers are in order and tomorrow (Thursday) the programme is continuing," Munyoro said.politics
Share !