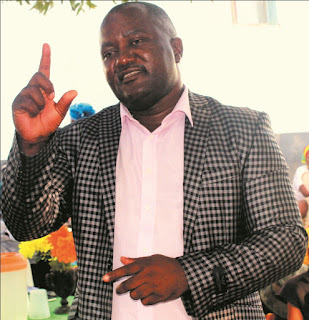 MWENEZI - There was an outrage last Saturday when the newly elected Zanu PF Masvingo provincial chairman Ezra Chadzamira boldly proclaimed that elections in the country were nothing but a ruse to identify those who like Zanu PF and those who do not.
Addressing Zanu PF structures at an inter-district meeting held at Rutenga Primary School, Chadzamira made inferences suggesting that voting for any other political party in an election is tantamount to exposing oneself and wasting time.
"Sarudzo idzi kungoitawo asi chinangwa chaicho ndochokuona panenge pane matsosti akawanda asinga vhoti zvakanaka. Tsvangirai zvaaka vhoterwa muna 2008 akaitonga nyika? kuState house akanga asinga kuzivi? (Elections here are not genuine but are simply a way of identifying those who choose to vote wrongly. When Tsvangirai won elections in 2008, did he rule the country? Was he not aware of the route to the State House?" Chadzamira said.
These assertions are likely to be met by derision by the opposition which has always asserted that elections in the country have always been rigged or their results pre-determined.
Chadzamira, ironically, urged Zanu PF structures to unite and shun the imposition of leaders against the people's will.
"Masvingo province is one of the provinces gifted with resources yet we are the poorest. We spend a lot of time fighting each other and outsiders take that as an opportunity to loot our resources. That should be the thing of the past. Unity and development are our top priorities," Chadzamira said.
The inter-district meeting that was graced by other party bigwigs including national chief whip Lovemore Matuke and acting provincial political commissar Jevas Masosota as well as senior Zanu PF officials from provincial and district structures among others.politics
Share !