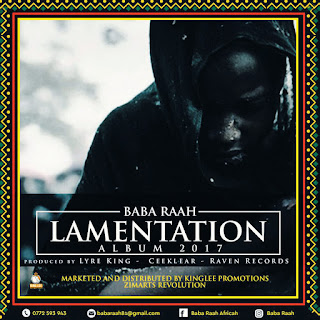 MASVINGO – Upcoming musician and talented theatre artist Ngonidzashe Chinovava, popularly known as Baba Rah in the entertainment circles, is set to release his second album next month.
Having rocked airwaves with his tracks like Ndoramba, and Muranda three years ago, Chinovava said July was the month his fans can expect his latest offering.
"It is true that I have a new album titled Lamentation which will be available on the market for all music lovers in July. This is my second piece of work after my first album titled Ndoramba was released in 2014. The album has eight new tracks and five bonus tracks.
"Lamentation is the title track and the bonus tracks include songs released as singles and these include Misodzi and Mhiripiri nemunyu.
Chinovava also said his messages were motivated by day to day events in the society he grew up in.
"Having been raised from a background where youths find it hard to find their way to the top, I craft my music to motivate them. I feel reggae music has always carried such messages but for locals, the messages will have more impact if communicated by someone they know at a personal level.
"I am also glad that Masvingo, besides having many voices to market our work, now has a local radio station Hevoi FM which will support our work. This makes me double sure that my new album will be better received than the first one which was set back by lack of airplay," Chinovava said.
The theatre star, who has committed himself to training young people in theatre arts, revealed that he discovered his musical talent while performing a play on stage.entertainment
Share !