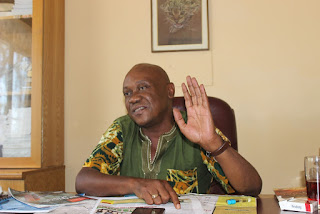 MASVINGO – Regency Group of Hotels director Edison Zvobgo Jr says the company was moving swiftly to restore all services at Chevron Hotel, which was gutted by fire last week, back to normal.
Part of the hotel caught fire due to a suspected electrical fault last Thursday night, leaving the kitchen and pantry extensively damaged.
"The fire was a big blow to us because a lot of equipment was burnt. However, the mishap didn't deter us from moving forward as we are working to restore our services by having the kitchen renovated. We have since had people bringing in quotations to repair the damages done to the buildings," Zvobgo said.
He further told TellZim News that he was happy guests were still getting the same quality services despite the setback.
"When the mishap happened, we offered most of our clients alternative accommodation at our sister hotel, Flamboyant, but they said they were good being at Chevron. This then prompted us to make use of our emergency kitchen and we also transformed one of the rooms into an impromptu kitchen so that we could keep giving them quality service," added Zvobgo.
He revealed that the company was yet to get a formal report on possible causes of the fire, adding that a forensics team had since visited the hotel for investigations.local
Share !