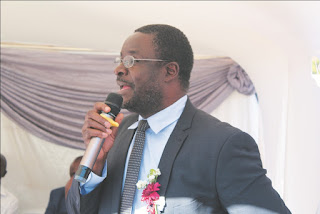 MASVINGO - Permanent secretary in the Ministry of Information, Media and Broadcasting Services, George Charamba last week dealt a devastating blow to hopes for the licensing of non-profit community radio stations, saying existing radio stations were serving the community too.
Charamba made the remarks in the presence of Minister Chris Mushohwe and other dignitaries at the official launch of Hevoi FM in Masvingo last Thursday.
Sounding as hawkish as ever, Charamba was unapologetic in his approach, dismissing the pro-community radio lobby as misplaced.
"Word rekuti community radio presupposes kuti kune imwe radio isingasevhi community. Ndeipi iyoyo? Inosevha ani? ....Kana isingasevhi community iri kutaura kunani? National haisi community here, commercial haisi community here mutawindi? …. Ndangoti nditi gagagagaga vamwe vachagumbuka vamwe vachasekerera zvisinei ndihwo upenyu hwacho, ndihwo ukama hwacho. Hatingogari tichingofara asi zvandakaudzwa naminister ndezvekuti we must make policies that make sense on the ground," said Charamba.
He argued that the community radio idea was a foreign concept that the people wanted to blindly copy and paste onto the local arena without evaluating its significance to local needs.
"After all, no idea is compatible with all conditions; it depends on how you tether it within a specific social milieu," he said.
In response, the Zimbabwe Association of Community Radio Stations (Zacras), the biggest community radio lobby in the country, issued a statement condemning Charamba for opposing democratic principles on open airwaves.
"It is the normal behavior of those who hold power when they feel challenged and we expect that. It is dangerous and irresponsible for Charamba, a public official, to attempt to fool the public by pretending to be confused by the difference between community and commercial radio," reads part of the statement.
In the recent past, government licensed a number of commercial radios belonging to individuals with strong connections to the ruling Zanu PF party but has steadfastly refused to do the same for non-commercial ones despite its own survey findings known as the IMPI report pointing to the need for them.
Hevoi FM, and two more commercial stations, belongs to the AB Communications stable which is owned Postal and Courier Services minister Supa Mandiwanzira.local
Share !