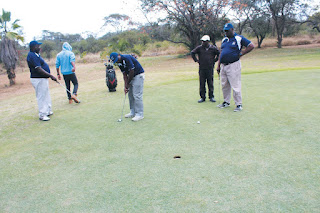 Talented golfer Killian Musiyiwa put on a spirited fight to win the local chapter of the Commander Zimbabwe National Army (ZNA) Executive Interactive Charity Golf Tournament which was played at Masvingo Golf Club last Sunday.
Playing off 23 handicap, Musiyiwa amassed 41 points gross, beating a long list of other more talented players who thronged the course from such places as Renco Mine, Zvishavane and the Lowveld.
The tournament, which was sponsored by renowned contractors Jadecon Construction and Engineering as well as auto repairs and services giant Byword Motors, raised a substantial amount of money for charity.
Game format was individual stableford played over 18 holes, with Musiyiwa winning the tournament through a slim two points margin ahead of Charles Mativenga who finished third with 39 points.
Alpha Cottages children home, the recipients of the proceeds of the charity golf tournament which included 20 blankets, already has three fish ponds built courtesy of Jadecon Construction and Engineering, all for the purposes of augmenting the shelter's income-generation capacities.
Speaking at the prize giving ceremony after the tournament, Deputy Commander 4 Infantry Brigade Colonel Blessing Maraire, who stood in for Brigadier General Exsebious Tshuma as the patron, said it was the dream of the ZNA Commander, Lieutenant General Phillip Valerio Sibanda that the welfare of the less privileged is taken care of.
"The golf tournament fundraising initiatives, alongside the Funshoot which will be held at Mushandike and a ruffle draw we are running, is the brainchild of the ZNA Commander for charity purposes. This is also our way of interacting with the community and that has been happening since 2004," said Col Maraire.
He thanked all players and the sponsors for supporting the initiatives and pointed out that the ZNA districts charity golf tournaments for 2017 will culminate in a bigger national event in Nyanga on September 14-17.
Jadecon Construction and Engineering director, who is also Masvingo Golf Club captain, Stanley Kondongwe thanked the ZNA and all players for choosing to partner the community to advance a charitable cause.
"We are humbled by the commitment and passion we witnessed today. We had not expected such an overwhelming response for a Sunday tournament when many people will be preparing for work the following day. This is for a good cause and it also serves to support Masvingo Golf Club," said Kondongwe.
Other winners were S. Chisiwa, T. Mpofu and D. Changara, T. Nhemachena and C. Chimuti all with 38 points; W. Mativenga, S. Masiya and S. Mapuvire all with 37 points while T. Gozo took the nearest water number 11 prize.
Nearest the pin on holes 3, 9, 12 and 18 were R. Mahachi, P. Samboko, N. Mapako and B. Badza respectively while longest drive on holes 1 and 17 were S. Mapuvire and S. Chisiwa respectively.sport
Share !