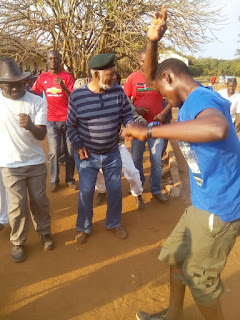 Omar dances with supporters at his Neshuro rally

MWENEZI - Zanu PF Member of Parliament for Mwenezi East, Joosbi Omar last week dismissed as unfounded rumours that have been circulating on social media alleging that he was critically ill after suffering a stroke.
Addressing Zanu PF supporters at his by-election victory celebrations at Neshuro High School last Saturday, a jovial Omar said speculations about his health were misplaced.
"I am still alive and strong, that's why I dance for you. The rumour that I stroked are absolute lies that were crafted by my detractors.
"Despite the current financial constraints, developmental projects will continue. I am aware that there are several problems troubling the constituency like pupils who attend lessons sitting on the ground. I will do my best to resolve such problems," said Omar.
Zanu PF provincial secretary for transport and welfare, who is also the district party chairperson, Rennias Muchoko also said he had received several phone calls from people seeking clarifications with regards to Omar's stroke reports.
Part of one of the WhatsApp messages that had been circulating read, "Omar hospitalised in ICU after stuck (sic) by stroke hardly less than a year after Mazebra died under similar circumstances.  Mwenezi MP sit (sic) makata tangatati kuda uyu ane mutupo usingazivikanwi ndiye achazvigona bva zvaramba."
Omar became MP this year after winning a by-election to replace Joshua 'Mazebra' Moyo who died in December last year after a long time of fighting what was said to be a mysterious illness.
Omar is on a one week tour at six points in the district, with a beast being slaughtered at each gathering to celebrate his election victory while reassuring supporters that he will keep his promise to develop the constituency.local
Share !