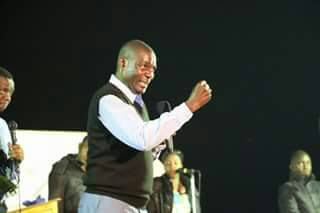 CHIREDZI - Jesus for Africa Evangelistic Ministries (JFAEM) leader Paul Saungweme has broken his silence on his purported exit from Zaoga Forward in Faith Ministries, saying he was still a follower of Bishop Ezekiel and Eunor Guti.
There have been widespread speculations that Saungweme had left Zaoga and had decided to start his own church.
In an interview with TellZim News after his five day crusade held at Tshovani Stadium recently, Saungweme said that it was mere hearsay that he had separated himself from Zaoga, claiming he started JFAEM with the 'anointing' of Bishop Guti.
"I am still a follower of Bishop Guti; I still go to Zaoga if I do not have a schedule elsewhere on Sundays. Bishop Guti is still my father. It's only that I now have a ministry not a church, just like David in the in the Bible, he was the son of Jesse but served Saul," said Saungweme.
He said JFAFEM was a combination of different church believers who come together and preach the word of God to the people for salvation's sake.
"JAFEM is not a church, we are a ministry comprising believers from different churches who come together and preach the word. Our aim is to spread the word of God to the people so that people can be saved," said Saungweme.
"The idea is to spread the word of God to every corner and at the end of the day, a person should choose a church. Just like what Joyce Meyer does, she preaches the word and people choose their church. JFAFEM is not a church,'' he said.
The crusade attracted thousands of people and was graced by pastors from different churches such as Awake Grace Ministries, Zaoga, Reformed Church in Zimbabwe (RCZ) and other inter-denominational alliances like the Evangelical Fellowship in Zimbabwe (EFZ) and Pastors Fraternal.religion
Share !