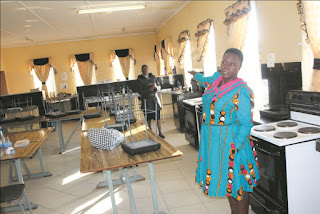 For many people, leadership merely entails being in front of others and giving instructions to subordinates, but for Ndarama Government High School head Shirley Makausi, it means much more than that; it means doing things right and setting a precedent.
Within a relatively short period of time, Ndarama High School has become the best government day school in Masvingo province in terms of everything; the quality of learning facilities, cleanliness of surroundings and, most importantly, the quality of academic results.
Makausi became Ndarama High School head in February 2004, when the school had just introduced its first 'A' Level class. At that time, public perception of the school was dismal, with classes being difficult to fill as parents opted to send their children to other schools with higher rankings.
In a major turn of the trend, Ndarama High now practices hot-sitting as a way of accommodating the hundreds of children who have been fortunate to get a place at the school.
The public school had never managed even a 20 percent pass rate at 'O' Level since at least 1998, when the pass rate fluctuated between eight and 18 percent.
With determination combined with the requisite charisma, Makausi managed to turn things around and made Ndarama High a first choice school even for those who had hitherto juxtaposed government schools with degradation of standards, indiscipline, poor academic results and general decay.
Ndarama High School now boasts a stunning appearance often synonymous with well-heeled private schools only; an attractive aura which extends to an excellent learning environment and culminates in rising academic outcomes.
The school, despite practicing hot-sitting, recorded a 76.25 percent pass rate for its 2016 'O' Level class, an astronomical rise from the around 15 percent when Makausi took over in 2004.
Now, in a society which knows more headmasters than headmistresses, and in a field where celebrated achievements seem to accrue more from the male than female effort, it would be an error of omission to ignore the distinguished work that has been done at Ndarama High School.
Makausi went to Usher Secondary School in Bulawayo, St David's Bonda High School before proceeding to university where she acquired her teaching qualifications.
Since then, she amassed vast teaching experience over the years, having taught at St Anthony's Musiso High School in Zaka from 1980 to 1983 before moving to Christian High School in Masvingo.
Between 1996 and 1997, Makausi was acting deputy head at Victoria High School before becoming Chirichoga Secondary School head from 1997 to 2004.
Though she acknowledges that the education sector, like any other sector for that matter, is still largely a dominion of males, she maintains there are opportunities for women too if they choose to widen their scope.
"Getting a good education, working hard and having confidence in oneself is the surest way for people to improve themselves. I was well-equipped for the job when I became head so women should be encouraged to have high self-esteem and apply for promotions when chances come," said Makausi.
After becoming Ndarama High School head, she oversaw the addition of new classroom blocks and the school is now building a science block for 'A' Level pupils as a way of advancing the teaching of science, maths and technology (STEM) subjects.
Regarding the achievements that Makausi has made on behalf of Ndarama High School, the biggest highlight of all is probably winning the 2013 Secretary's Merit Award, a coveted recognition of a school's outstanding accomplishments.
"We believe we are still Award material, we got all that it takes to be there again. We want to leave a legacy that will live on long after we are no longer here. I am fortunate to have a team of hardworking teachers who admire what I do. The deputy head Mr Mukawu is very supportive, and the SDC (School Development Committee) is united in making a success of the vision I have for the school," Makausi said.
Together with her team and the SDC, she has made strides to meet the full requirements of the new curriculum and the school now has a well-equipped Food Technology and Design department where pupils learn such skills as cake making.
The SDC is also pioneering a vibrant agricultural project at the school and is setting up a greenhouse in which quality vegetables are expected to be produced at limited costs.
Sanitary facilities at the school have been upgraded, with restrooms for both staff members and pupils now sparkling clean and are equipped with soap dispensers, electric hand driers and showers.
A devout Catholic who puts God first in her work, Makausi has also nurtured a culture of zero tolerance on littering and disorderliness at Ndarama High School, an approach that has won the school the admiration of many as emphasis is put on the need for pupils to keep the surroundings ever spotless.
On time keeping, Makausi says there is no better way of instilling that virtue into children than by leading by example.
"I have to be here by half past six every morning to get myself ready so that our children can learn the importance of observing time. When I later go and stand in front of them at assembly, I set the tone for the day and everybody feels challenged to make the best out of the limited time we have," she said.local
Share !