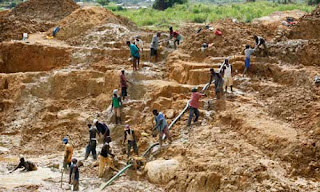 ZVISHAVANE - Disagreements over ownership of a mine in Vanguard, Mberengwa, turned violent, resulting in the owners of the claim being injured by gun shots, the Zvishavane Magistrates Court heard last week.
Herbert Kwenzani (43) of 6303 Ngundu Close, Mucheke in Masvingo, was reportedly shot by Ronald Mugangavari (29), of Zvishavane, who was aggrieved after losing ownership of Midway 15 mine through a High Court ruling.
Mugangavari and his security guard Tawanda Moyo, appeared before Zvishavane magistrate Shepherd Mnjanja facing attempted murder charges.
Appearing for the State, Amos Ncube told the court that on July 4 this year, Mugangavari, in the company of Moyo, went to the mine to confront Kwenzani who happened to be at the property with his brother, Robert Hwekwete, to tend operations that had resumed following their court victory.
When the new mine owners approached Mugangavari and Moyo to find out why they were at the site, the latter allegedly took out guns and fired at the two brothers injuring them in the process.
According to the State, Kwenzani was shot on the knee while Hwekwete was shot on the palm and the firearms used were recovered and sent to police ballistics for forensic examination.
The two suspects were granted a bail of US$100 each and will be back in court on July 19 for continuation of trial.local
Share !