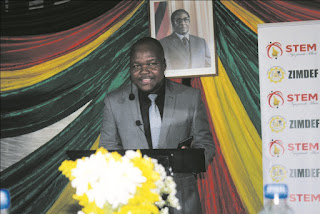 Dr Gandawa stresses a point at the luncheon

MASVINGO - Deputy Minister of Higher and Tertiary Education, Dr Godfrey Gandawa last week railed against state universities that are recruiting 'more than necessary' arts, humanities, and social sciences students, saying more attention should rather be given to science-related disciplines that create employment.
In his lengthy presentation at a business luncheon on the role of STEM and universities in industrialisation and modernisation at a local hotel last Wednesday, Dr Gandawa did not mince his words in his condemnation of the mass recruitment of arts, humanities and social sciences students, arguing that their opportunities on the job market were fast dwindling.
He said he was leading a transformation agenda; telling his audience, who included university vice-chancellors, other academics and representatives from the industry, that there was absolutely no justification for enrolling thousands of such students every semester when the global economy is increasingly becoming nano-technological.
He specifically took aim at the archaeology degree being offered at various state universities, arguing that there was no vibrant archaeology industry in Zimbabwe to warrant current enrollment levels.
"Are we not contributing to unemployment through the massification of humanities graduates? What's informing our enrollment when there is no communication between industry and universities?
"Concentrate more on the practical, technical, scientific and vocational skills which I feel will close the gap between need and available jobs. If we don't do that, if we concentrate on this 'elitist' kind of education, where we should be good at speaking good English to do anything, we will continue to create problems for this country.
"Are we creating the industries? No, we are creating the toyi-toyi guys. What we have done is; because somebody just wants a degree, the university wants money, we recruit. Seriously, we are causing problems to this nation," said Dr Gandawa.
He warned permanent secretary in the Higher Education ministry, Professor Francis Gudyanga that he had a 'mammoth' task to reverse the trend.
He also queried the quality of professionals being churned out by universities yearly, saying the curricula was far too way behind, leading to the production of a workforce which he said was hardly competent to understand the dynamics of a fast changing world.
"I maintain our universities are not training for the future but are mainly training for the past and, if we are lucky, for the present....Is the lawyer we are training today able to defend me in a court of law dealing with cloud computing, data analysis and cybercrime?
"Our social science theory is divorced from a world functioning that is riding on science and technology. We have an educational system which fails to impart skills that are required by industry and more often than not, industry has to retrain graduates. They have the theory but no practical skills," said Dr Gandawa.
His words were supported by the Zimbabwe Manpower Development Fund (Zimdef) CEO Fredrick Mandizvidza who said the country cannot run on huge numbers of arts and humanities graduates.
"We are looking at jobs of the future through the STEM programme. The kind of skills that we anticipate to be equipped into these young people, are skills for jobs of the future, not for jobs of today because the world out there is moving and moving very fast," said Mandizvidza.
In July 2015, Higher and Tertiary Education minister Professor Jonathan Moyo called for a review of the tertiary education system, saying universities were churning mostly 'unemployable' commercials and humanities graduates with 'irrelevant' degrees that do not speak to market demands.local
at Saturday, July 29, 2017
Share