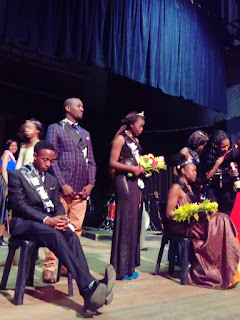 Mr and Miss Masvingo Poly after their crowning

MASVINGO - Panashe Mbewe and Simbarashe Mbabvu were last week crowned Miss and Mr Masvingo Poly respectively after a tightly-contested competition held at the Charles Austin Theatre.
The two winners emerged victorious after beating a total of 14 other equally determined contestants.
Shantel Mahaso and Rudo Mukatyamari were crowned 1st and 2nd Princesses respectively while Tariro Chisuvi was crowned Miss Personality. Farai Masenda and Tinashe Misha were crowned 1st and 2nd Princes respectively.
Mbewe said she had always been confident that she was going to win, having previously won the Miss Personality title last year.
"The competition was stiff since there were other bug names among the contestants like last year's Miss Valentine Masvingo," said Mbewe.
On the other hand, Mbabvu said he was surprised by the win as it was his first time to contest in such a competition.
"I was surprised by the results since it is my first time to compete. I thank my friend Tracy Masunda for she is the one who persuaded me to contest," said Mbabvu.
Masvingo Polytechnic College Student Representative Council (SRC) president Promise Mudavanhu thanked the college administration for the financial support they extended to the contest, itself a brainchild of the SRC.
"Next year we will ask for more financial support from local business people. This year we were supported by George Maponga," said Mudavanhu.entertainment
Share !