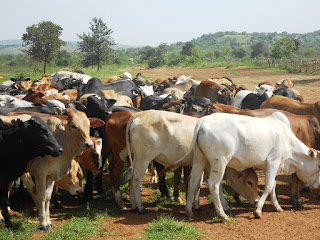 MWENEZI – Several farmers last week converged at Chizumba for a livestock field day where knowledge on how to best care for cattle in a drought-prone region was shared.
Chizumba feedlot was constructed by labour from the community after receiving materials from the Food and Agricultural Organisation (Fao) for the purpose of temporarily sheltering beasts destined for slaughter.
Feed for the livestock is loaned to the farmers by the Success Microfinace Bank.
Provincial livestock production development officer Aaron Muchazivepi, who was the guest speaker, advised farmers in the district to prioritise cattle rearing as it the most lucrative farming options available.
"Besides Masvingo being one of the provinces with the highest numbers of cattle which are more than one million, Mwenezi district is at the top of all other district in terms of the number of cattle. There is need to adopt strategies that ensure cattle survive even in the face of severe droughts," said Muchazivepi.
Success Microfinance Bank managing director, Innocent Sithole said his institution issued loans even to those who previously had been regarded as ineligible due to issues of collateral.
He said the loans are given in the form of feeds not money as cash was prone to being diverted.
The field day was attended by various dignitaries and stakeholders among them provincial veterinary officer Dr Ernest Dzimwasha, Success Microfinance Bank provincial business development officer Pascal Makwarimba, abattoirs representatives, farmers and ordinary people.local
Share !