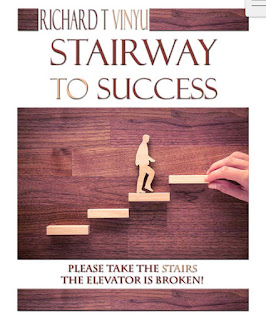 MASVINGO – Budding writer, Richard Tendai Vinyu last week launched his first motivational, inspirational and transformational book titled A Stair Way to Success.
"This book is aimed at inspiring the youths both locally and globally to change their lives beginning at individual level. It also contains vital information for everyone who want to live a successful life. This is but just the beginning of greater influential motivational works to come," said Vinyu.
Vinyu said the book, which had sold 180 online copies at US$1.50 week, was setting the pace for greater works he plans to publish in the future.
The new writer says he was inspired by Bob Proctor, an American transformational speaker whom he works with in his writings.
He has a vision of publishing about three books annually and is also focusing on building a publishing house in Masvingo.
"I want to write three books per year. Many writers go to Harare and Bulawayo to get their work published but I want it done home, here in Masvingo. I have a vision of starting a publishing house here in town," Vinyu said.
He encourage young people to make use of what they have and their capabilities to develop and change their lives in light of the high unemployment levels.
He also urged the people to developing a reading culture saying it was through reading that minds are sharpened and new possibilities are identified.
"Let's use our minds because success is inside. That is my encouragement to the youths," said Vinyu.entertainment
Share !