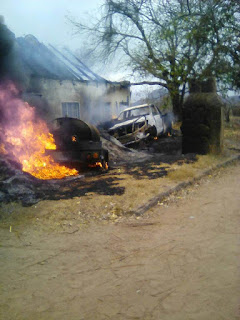 A scene at Mujingwe Conservancy after the attack

MWENEZI - A group of suspected Zanu PF youths who are said to be linked to other 13 party youths who were recently arrested in connection with destroying property at Mujingwe Conservancy, on Tuesday morning went on the rampage burning houses, lodges and cars at the conservancy.
Though no immediate comment could be obtained from the police, sources confirmed the incident and said the situation is currently tense at the conservancy as the youths are reportedly vowing that sabotage will continue till their plight are addressed.
Armed riot police officers have reportedly been deployed at the scene to try to avoid a repeat of the arson attacks.
"The incident happened after police destroyed a base which was recently set-up in the conservancy by the youths. The police destroyed the base demanding that the youths should vacate. The youths had earlier on given the conservancy owner an ultimatum of 48 hours to vacate the property.
"In revenge, the youths confronted the police officers and gun shots were heard in broad daylight. The police were caught by surprise and they ran away after being overpowered by the youths who later captured one of the officer and severely assaulted him," said a source who spoke on condition of anonymity.
Other sources said after the officers were forced out of the conservancy, the youths went on the rampage; burning three houses, lodges and four cars belonging to the conservancy.
Mujingwe Conservancy is said to be co-owned by ZimParks and a prominent businessman identified as Mazibuko who took it over following the expulsion of the former white owner.
The youths are said to be angry that the conservancy has not been given to them as promised by some top party leaders.local
Share !