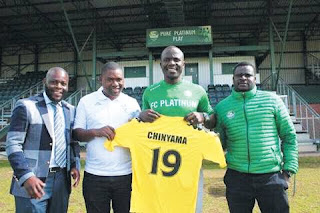 ZVISHAVANE - Former Dynamos striker Takesure Chinyama has joined ambitious Zvishavane side FC Platinum from Polish Division 3 side LZKS.
When contacted for a comment, FC Platinum spokesperson Chido Chizondo confirmed the new development at the club.
"Yes so far we have signed Takesure Chinyama who has been based in Poland," said Chizondo.
Chinyama, who scored 26 goals for his Polish team in the just ended season, was unveiled at Mandava Stadium on May 26.
The striker once formed a deadly combination with the self-proclaimed prince, Rodreck Mutuma under former Warriors coach Calisto Pasuwa.
Speaking to the media after an encounter with Tsholotsho FC which they won by a goal to nil last weekend, FC Platinum coach Norman Mapeza hinted had that he needed at list two new strikers.
"Definitely something needs to be done upfront. Defensively we are ok, but I think we need two more strikers. We have won this match but we did not play well especially during the second half. However a win is a win even though I was expecting a bigger margin," said Mapeza.
The Pure Platinum play gaffer also took that opportunity to express his 'deepest condolences' for the untimely death of former Warriors winger Edzai Kasinauyo.sport
Share !