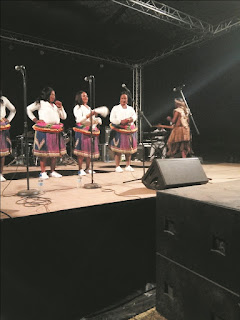 Chauke and his band performing at Tshovani Stadium

CHIREDZI – Musician Thomas Chauke last week staged his debut performance at Tshovani Stadium as part of efforts to raise funds for the ongoing Great Limpopo Cultural Trade Fair.
The musician, with his Xinyori Sisters band, gave an energetic performance which helped cement his status as one of the greatest musician singing in Xitsonga to ever emerge out of Zimbabwe, South Africa and Mozambique; the three countries with the biggest population of Shangani-speaking people.
The fundraiser was one of the many initiatives that have been put in place to mobilise resources for the cross-cultural fair which are being held at Mhlanguleni.
The cultural programme involves performances by people living in the communities around the border areas of the three neighbouring countries.
"This was my first show in Zimbabwe and I really enjoyed it. It was an honour to be called to perform in front of our fans outside of South Africa. I have relatives in here in Zimbabwe, the Chaukes, but I am from South Africa," Chauke said.
Director of the Great Limpopo Cultural Trade Fair, Herbert Pikela also said the show had added value to the cultural fair.
"Chauke's show and his partners has served as an awareness campaign; meaning the whole of Mozambique, South Africa and Zimbabwe now knows the importance of the cultural fair and we also look forward to an improved turnout of exhibitors," said Pikela.entertainment
Share !