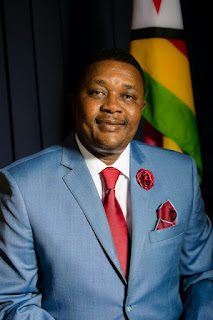 President Robert Mugabe has once again made clear his unreserved support for Masvingo South legislator and Minister of Tourism Walter Mzembi by publicly ordering the political leadership in the province to respect the youthful minister whom he said deserved yet another term as a Member of Parliament (MP).
Addressing thousands of Zanu PF supporters at a youth interface rally in Masvingo last week, Mugabe said he was disappointed to learn that there were some people who did not like Mzembi in the province despite the fact that the Tourism minister was among his best ministers in the current cabinet.
The President openly told the crowd that Mzembi was not going anywhere.
The veteran politician said he learnt about the problems affecting Masvingo province through Mzembi who later on facilitated a dialogue between the MPs in the province and the two ministers Shuvai Mahofa and her Pyshchomotor counterpart Josaya Dunira Hungwe.
Hungwe and Mahofa are known for fighting Mzembi in the province and are advocating for the takeover of sugarcane farms that belong to Tongaat Hullet while Mzembi and other MPs in Chiredzi are vehemently opposed to the idea.
"It was Mzembi who came to me and told me that he was no longer in good books with ministers Hungwe and Mahofa over the issue of Tongaat Hullet sugarcane farms. Mzembi told me that he wanted to facilitate a meeting between MPs from Masvingo and those who were advocating for the takeover of sugarcane farms … we held two meetings - one at State House while the other one was held at Triangle.
"Up to now we are still failing to have a common ground…. however, I want to tell you that no one shall be allowed to grab a sugarcane farm from Tongaat Hullet," said Mugabe.
However, Mugabe's remarks did not go down well with Team Lacoste sympathisers who are already plotting to defy the President through demonstrating against Mzembi.
Leaked WhatsApp group messages seen by this publication show that Lacoste sympathisers are planning to humiliate Mugabe by slapping Mzembi and Minister of State for Manicaland Provincial Affairs Mandiitawepi Chimene as well as Manicaland provincial chairman Samuel Undenge with votes of no confidences.
According to the leaks, the demonstrations against the trio are supposed to be kick-started anytime soon.
In the WhatsApp messages, Brain Munyoro – a well-known Lacoste sympathiser and Zanu PF provincial youth executive member for Masvingo province, and his fellow group members, engage in a no-holds barred discussion against Mzembi, labelling him a sell-out due to his alleged close links to Mugabe.
Asked to comment about how he felt after Mugabe's remarks in Masvingo concerning his role in the issues affecting the province, Mzembi said there was need for Masvingo leadership to respect each other.
He also bemoaned how some of the party bigwigs were now abusing Mugabe's name in order to deceive the public into believing that whatever the ministers or politburo members were saying had the President's blessing.
"Nhamo yedu mumumusangano ruvengo nedzvene, ndihwo uroyi hwemasikati, makuhwa evarume anopfuura emadzimai. Chimwe chifo manyepo, kurevera vakuru nhema 'President vati', ndanga ndina President', 'Ndatumwa na President', kusaita matyira nezita ra President … ko isu tinogara navo mumatare makambonzwa tichisevenzesa zita ravo pese pese here? Dai tamira izvozvo tisevenzere vanhu takanyarara," said Mzembi.
TellZim News is reliably informed that Mzembi is being sacrificed by Masvingo's top Zanu PF leadership for opposing the takeover of Save Valley conservancy as well as Tongaat Hullet sugarcane farms.
In the cabinet meeting on Tuesday last week, Mzembi reportedly urged Mugabe to take advantage of the Masvingo interface rally to talk about policy issues mainly concerning Tokwe-Mukosi dam as well as the Tongaat Hullet sugarcane farm invasion saga.
With nine years at the helm of Tourism Ministry, Mzembi automatically qualifies as the most senior cabinet minister from Masvingo province.local,topnews
Share !