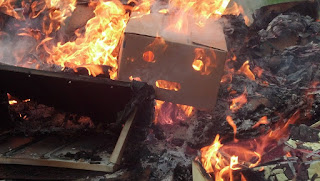 MWENEZI - A homeless mentally-challenged man who had been squatting at Neshuro growth point for many years died last week after his clothes caught fire, causing him severe injuries that killed him two days after being admitted at hospital
Paradzanai Shonhai is understood to have been suffering from mental health problems for decades and had had no decent abode since the 1990s.
He was laid to rest at his rural home in Mukachana village under Chief Chitanga.
Ward 5 councillor, Master Makope confirmed Shonhai's death saying the injuries that he sustained had caused his death.
"People found his burnt body in the morning and he was rushed to Neshuro Hospital but he died two days after admission and his death was necessitated by injuries caused by the fire," said Makope.
He said Shonhai was given a decent burial after the community around the growth point mobilised resources.
It is suspected Shonhai's clothes could have caught fire after crawling too close to a fire he had started to keep warm in the night.
His burial was attended by council representatives, Neshuro District Hospital Staff, representatives from various political parties, various church denominations and ordinary people among others.local
Share !