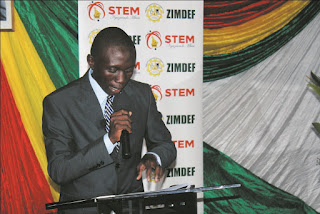 MASVINGO – Salim Zulu, an Upper Six pupil at Zimuto High School has copyrighted a banking software which he designed as part of his own innovations to increase convenience in banking processes and to bring an end to cash queues.
The 18-year-old Zulu developed his software, called TLC, starting last year and has already had an opportunity to present it to the Reserve Bank of Zimbabwe (RBZ) and he hopes he will get the necessary support to successfully commercialise it.
Zulu, who is a beneficiary of the government's STEM (Science, Technology, Engineering and Mathematics) initiative, is studying Mathematics, Physics and Chemistry at the Reformed Church in Zimbabwe (RCZ)-run high school.
Last week, he was given an opportunity to present his intellectual property at a business luncheon on the role of STEM and universities in industrialisation and modernisation.
TLC is a national payment system, a banking service more specifically, which gives one the chance to enjoy bank card payments free of charge.
Merchants will be able to receive card payments on their phones using the TLC application (App) that will replace swiping machines, a convenience which is expected to dominate business payments on public transport systems (kombis) and on the informal market (musika).
This means that the bank card will have been linked both to the actual bank account and a TLC virtual account, with the TLC service working as a wallet.
TLC merchants are given the TLC application which they use to process any customer payment services.
Funds in the actual bank account are transferrable to the TLC wallet and once funds are in the wallet, one will now be in a position to enjoy uncharged payments – no swiping charges and no processing charges.
The service will be subscription-based with only 0.5 percent of the amount transferred from the actual bank account to the TLC wallet taken as the service subscription fee, for instance, if one transfers US$500, a mere US$2.50 would be taken.
Card payments are able to be processed on phones without swiping machines because of the QR scan system which is used. Alternatively, the customer can use an Unstructured Serial Services Data (USSD) menu but the transaction will require manual entry of the card number instead of simply scanning the code.
What one just needs to make payments is to have a TLC-upgraded card and the merchant will enter the required amount using the TLC App and then scan the QR code before the cardholder enters his/her pin to authenticate the transaction.
"If I get the required amount of money to launch the system, bank queues will disappear and the system will raise enough money to sustain itself without reaping off its clients. Part of the profits made will be channeled to commercialising other products like a vegetable cutter being developed at the school.
"The service seeks to employ 150 agents at launch and lead the drive towards industry 4.0 which is being driven by STEM," Zulu said.
Zulu, who thanks his school for supporting him, is currently working on other software projects that he hopes will transform the identification of patients at hospitals through a secure national database of people and their medical conditions.education
at Saturday, July 29, 2017
Share