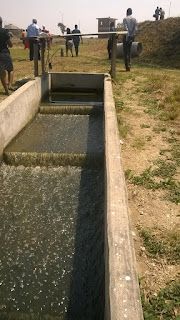 MUTARE - The Ministry of Agriculture, Mechanisation and Irrigation Development has partnered the United Nations Development Programme (UNDP) to rehabilitate Nyanyadzi Irrigation Scheme.
The ministry injected US$400 000 for services and machinery while UNDP, through OXFAM, chipped in with US$300 000.
Over 700 families in Nyanyadzi are already benefiting from the project.
Production at Nyanyadzi Irrigation Scheme had dropped since year 2000 but work for rehabilitation commenced last October and it is expected to end this month.
An official in the Ministry of Agriculture, Mechanisation and Irrigation Development for Chimanimani district, Aaron Mwanasawani confirmed that the Nyanyadzi Irrigation Scheme was now fully functional.
"I can confirm that Nyanyadzi Irrigation Scheme is now fully functional. Water is now reaching each and every block of the irrigation scheme.
"This will change livelihoods across the entire community.
"Farmers are already using the facilities. There is now enough water and the farmers are expecting a boom in winter wheat yields," said Mwanasawani.
OXFAM project manager Dr Leonard Unganai hailed the government, partners and the community for the rehabilitation of the project.
"This project started in 2014 and it will end in October 2018. It was funded to the tune of US$4 million. The project was a success because of the unity of purpose from all stakeholders.
"Chimanimani district projects were allocated $1 million," he said.local