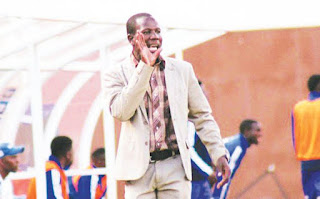 ZVISHAVANE - Shabanie Mine FC coach Takesure Chiragwi and his technical team last week faced a barrage of fury owing to poor performance by the asbestos miners who are languishing at the bottom half of the log table thereby risking going back to second tier football.
Bvaru- Bvaru fans were shipped to Maglas Stadium in a lorry and some private cars singing and chanting "Chiragwi and his team must go" mantra.
"The coach is failing us now, we started well but seems he has lost it all. We need another coach to turn things around otherwise we are going back to Division One," said one of the angry fans identified as Francis Makore.
The angry fans told the coach to pack his bags and go but were later addressed by the club technical director Takura Shariwa who pleaded with fans to give the coach more time.
"I understand your concerns, just give the coach enough time to prove his tactics, give him at least three games. If he fails them he will go," said Shariwa.
When contacted for comment, Chiragwi said he was still restructuring his team since they lost some of their valuable player during the August transfer window.
"I think we need to do better and get some points because we are dropping down the log. We have lost seven of our best players to other teams this transfer window and we are still settling. I hope we will be able to do that in no time," Chiragwi said.
Bvaru-Bvaru last won a PSL match about a month ago when they edged struggling Yadah FC in Harare, followed by a succession of poor results, losing to Highlanders and Bulawayo City and drawing with champions Caps United.sport