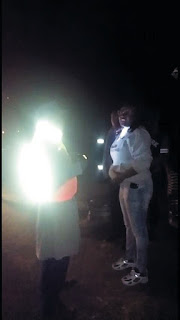 CHIRIMUHANZU - Traffic police mounting a roadblock at Chaka allegedly assaulted passengers travelling on a South Africa-bound minibus last Sunday night, TellZim News has learnt.
Though efforts to get a comment form Midlands provincial police spokesperson Inspector Joel Goko were unsuccessful as his phone was not getting through, TellZim News is reliably informed that a police case has been opened; CR 70/08/17.
TellZim News also saw a 30 second video of the alleged incident which was reportedly recorded by one of the victims who was also travelling in the same vehicle.
In the video, a woman could be seen against the background of vehicle lights trying to reason out with a police officer who is holding a torch but the video suddenly becomes hazy and the woman begins to scream in pain asking that she be left alone.
Lucy Chivasa, one of the alleged victims, told TellZim News that she was assaulted along with many other passengers after they disembarked to check on the driver who was being severely assaulted while his hands were cuffed behind his back.
"The driver was pulled over and he complied but the police officers accused him of disobeying their orders. There was some exchange of words and one of the policeman tried to pull the vehicle keys from the ignition but the driver would not let him.
"They were all visibly drunk and they forced his hands behind his back and cuffed him and began to beat him while we all watched from the vehicle. A passenger went out to try to understand what was going on but they immediately pounced on him and started hitting him as well," said Chivasa.
"They then started to accuse the driver of hitting one of them and that is when I also disembarked so that I could talk to the driver but they would not let me. They were so rough and mean, all the time speaking in abusive language full of obscenities and they called me a prostitute.
"Being a lawyer, I could not simply watch that abuse and I wanted them to take the driver to the police station and formally charge him instead of just beating him like that. They assaulted me and also hit and injured my sister Lilian who was recording the incident," said Chivasa.
Another victim also said a uniformed soldier joined the fray but later jumped onto a moving truck and escaped after one of the passengers he had attacked produced an army identity card which showed he was of a higher rank in the army.
"He ran away and jumped onto a moving haulage truck and we were stuck on the scene from around 11 pm to about 3 in the morning because the police would not allow other vehicles to give us a lift. But we later managed to get onto a bus and we dropped off in Masvingo where we made a police report," said one of the victims.local
Share !