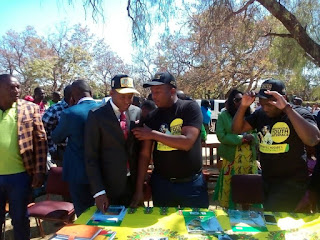 GWERU – There was drama recently when defiant Zanu PF youths linked to the Team Lacoste faction embarrassed Zanu PF youth league leader Kudzai Chipanga by repeatedly shouting anti-G40 slogans during a youth inter-district meeting held at Cecil John Rhodes Primary School.
Chipanga is believed to be a devout member of the G40 faction which is rabidly opposed to Vice President Emmerson Mngagwa succeeding President Robert Mugabe.
The youths, beaming with confidence that they were in a territory long considered to be Mnangagwa's stronghold, chanted 'pasi nevanoisira vamwe poison', in apparent reference to the alleged poisoning of Mnangagwa by his G40 political rivals at a rally in Gwanda recently.
The developments forced Chipanga to timidly warn that he will not accept bad behavior.
"Tinoziva kuti musangano kuMidlands wakasimba semusambangwena. Now let me warn you against one thing. I hear all those who are just shouting here. We won't tolerate such behavior when the President visits for the Youth Interface Rally on September 2. Anyone who will be seen shouting such chants will face the music.
"I know that slogans are approved so for those slogans that have no blessings from above, I will not accept," said Chipanga to a booing crowd.
However, Midlands provincial youth chairperson Prosper Machando, supported by many other provincial executive committee members present, stood and chanted the same 'Pasi nepoison' slogan again.
"Pasi nengozi, pasi nepoison, pasi nekuroya," Machando chanted.
"Woona VaChipanga vachitsikwa nechitima zvonzi vakaviwa nedhongi," he said in reference to widely discredited official accounts that Mnangagwa got ill after eating stale food.politics,topnews
Share !