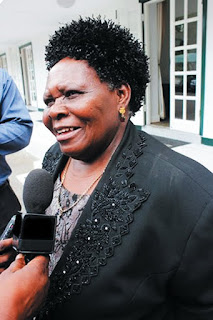 MASVINGO – Acting Minister for Masvingo Provincial Affairs Josaya Hungwe seemed to have entered into a panic mode following the death of the late Minister Shuvai Mahofa and the mystery surrounding the illness and subsequent hospitalisation of Vice President Emmerson Mnangagwa as he told hundreds of people at Masvingo Provincial Heroes Acre that it will be difficult for Zanu PF to win 2018 elections without Mahofa.
Mahofa, who was one of the faction's most strategically-positioned member in the province, was reported to have collapsed at her home on the early hours of Monday morning before being rushed to Makurira Clinic where she was pronounced dead upon arrival.
Mahofa died on Heroes Day, the very day that she was scheduled to officiate at Masvingo Provincial Heroes' Acre.
However, speaking at the Heroes Acre, Hungwe told the gathering that the game had completely changed and he was afraid that in the absence of Mahofa, campaigning for 2018 elections was going to be very tough for the party.
"Ikozvino ndinotarisa kuti toenda sei ku2018 elections tisina Shuvai Mahofa in this province. She was a visionary leader and had a foresight and I was proud of her as our leader.
"Mai Mahofa, was our big sister here in the province. As a person who went to war in her own right, an organiser in the province and a competent woman whose hard work cannot be paralleled," said Hungwe.
"Kuti tishaikirwe nevoice rake muno muprovince, we are poorer without her. Hatisi toga tarasikirwa naMahofa. Even the President feels the loss," added Hungwe.
Hungwe called on Zanu PF chief whip and politburo member Lovemore Matuke, Senator Clemence Makwarimba and party provincial chairperson Ezra Chadzamira to carry on the torch left by Mahofa.
"Makwarimba, Matuke and Chadzamira, Mai Mahofa havapo. Tinoinda sei kuna 2018 vasipo? Murukai imi ndimi veMasvingo munozikanwa kuti kana mada zvoukasha munopinda," said Hungwe.
He highly praised the three, who are all believed to be loyal fighters of the Team Lacoste camp, saying if he were the Biblical King Solomon – with all the extra-ordinary wisdom – he would have chosen them to help him rule the people.
What caused the sudden death of Mahofa remains unclear but she had been unwell for a very long time following reports that she was poisoned at the Zanu PF 2015 annual conference in Victoria Falls.
Drama at Mahofa funeral
There was drama at Mahofa's funeral in Rhodhene on Tuesday afternoon when Zanu PF youth embarrassed Bikita South MP Jeppy Jaboon who was in the company of Tourism Minister Walter Mzembi.
Jaboon, together with other suspected G40 loyalists who had gone to pay their condolences, were chased from the funeral for 'bringing poisonous ice cream from Gushungo Dairy'.
According to Jaboon, some youths approached him saying senior Zanu PF officials at the funeral suspected that he had brought ice cream from Gushungo Diary and they were not comfortable with his presence at funeral.
"I received a shocker as the Zanu PF youth began chasing us away from the funeral. What was more shocking was that they were accusing us of bringing ice cream from Gushungo Diary and they were saying the ice cream was poisoned. I had just gone to pay my condolences and nothing else and for your own information, I had no ice cream with me.
"I have since filed a police report at Masvingo Central Police and the RRB number is 3174229. I want those youths to give full details pertaining to their allegations because I was highly defamed," said Jaboon.
For a video about the story visit www.tellzim.com and watch TellZim News TV.news
Share !