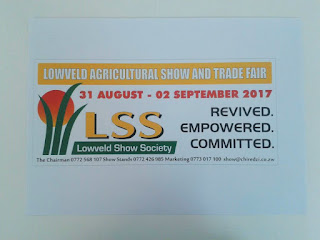 CHIREDZI - Preparations for 2017's edition of Lowveld Agricultural Show and Trade Fair which will run from September 31 - 2 are at an advanced stage with almost 70 percent of stands already booked by both old and new exhibitors.
The show will be held under the theme 'Revived, Empowered, Committed'.
The Lowveld Agricultural Show and Trade Fair is a platform for local, regional, national and international exhibitors involved in different forms of business to showcase their products and services and to exchange latest technologies in business.
Marketing Executive of the Lowveld Show Society, Graham Murindagomo said preparations for this year's trade fair were going on well with most of the stands already taken by old and new exhibitors.
"We have invited many exhibitors and our traditional as well as new exhibitors have confirmed their participation and some of them have already settled their dues.  We still have few stands available to those who still wish to showcase their products and services," said Murindagomo.
He said the exhibitor's dinner will be held on the night of Friday, September 1 with stakeholders having time to interact and exchange notes.
"The exhibitors dinner will be held at the Showground on Friday, 1 September 2017 at 18:30 hrs where exhibitors will have time to interact with each other," said Murindagomo.
Musical entertainment by various upcoming artists like Faster G and Okoye Swaggmore will be provided and there will be other thrilling arena events including firework displays, police motorbike displays, traditional dances and tug of war contests.business
Share !