‘No roadblock for Mugabe rally buses’ 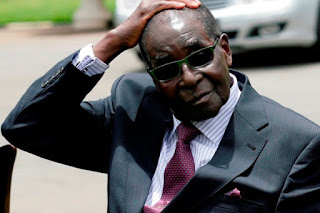 President Robert Mugabe
…all buses, kombis, trucks to be branded

GWERU – All vehicles that will be transporting people and equipment to the Midlands leg of the Presidential Youth Interface rally this weekend are said to have been guaranteed the right to free passage without worrying about outrageous delays at roadblocks, it has been learnt.
President Robert Mugabe will this Friday, September 1, 2017, be in Gweru at Mkoba Stadium where he is expected to address thousands of party supporters.
The event planning committee heard in a briefing meeting held at Gweru Government Complex recently that vehicles being used by those preparing for the event were facing delays on roadblocks.
It was at this juncture that the committee agreed that such vehicles should be branded with an 'On duty' sticker so that they can freely pass roadblocks.
"Work has since commenced on the venue but our contractors have brought in complaints of delays at roadblocks as they transport equipment from Bulawayo and Harare and this is slowing down progress," said one attendant.
The committee also suggested that those travelling from outside Gweru be exempted from toll gate fees though the participants strongly advised that drivers carry toll fares as a contingent plan just in case the plan does not succeed.
"A list of vehicles registration numbers can be compiled and given to Zinara in time so that vehicles travelling out of town can be exempted from toll fees as well," director in the Minister of State for Midlands Provincial Affairs' office, Cleto Diwa suggested.
"Drivers should however travel with toll fares as a contingent plan as we are not sure how swiftly Zinara will react to this," he said.
Gweru Provincial Administrator (PA) Aboit Maronge said Mkoba Commuter Bus Operators had offered 20 kombi's to ferry people to the venue and they should also freely sail through mounted roadblocks.
"I also have a letter from Mkoba Commuter Bus Operators saying they have 20 kombis to ferry people to and from the venue. These should also be branded so that they don't face challenges on roadblocks. The same should also be done to kombis from other locations like Senga," Maronge said.
Midlands senior police officers in attendance promised to make sure that all branded vehicles would pass through undisturbed.
"We will play our part and from here we will conduct Constable Muringa to have the branding samples for easy identification of vehicles travelling to the rally," said one police officer.top news
Share !