Home » Local » Of women abuse and the poverty factor

Of women abuse and the poverty factor 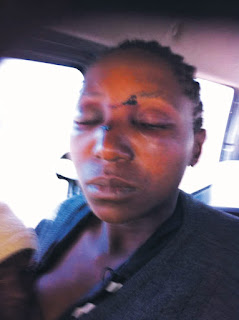 Gender Based Violence. Charity, after the assault by her husband

It is not an exaggeration that most of us have come across the old Shona dictum 'varume pasina vamwe' in one social discourse or the other.
The axiom disparages those men who apparently have nothing or have very little to offer materially or otherwise, such that their worth is rarely, if ever, appreciated.
This probably provides an apt explanation of the sickening and endless cases of extreme violence against women, violence perpetrated at home mainly by husband against wife.
Oftentimes, this violence – whether we call it domestic violence or gender-based violence (GBV) – is perpetrated for the most flimsy if not laughable reasons.
Recently, a woman from Gonese Village under Chief Serima in Gutu district, sustained severe injuries after her husband allegedly bashed her to a pulp. Reason: the man had spent the whole day away and when he came back in the evening, his wife offered him supper but he wanted his lunch first.
The man, identified as Albert Chikoto, wanted to be served the lunch which he had missed during the day before he could take his supper.
"The husband came home late and asked the wife for sadza, the wife gave him his supper. Zvikachinzi ko remasikati riri kupi mukadzi ndokuti ndanga ndaripa vana sezvo musina kudzoka masikati acho. Asi murume ndokuramba achiti ndinorida remasikati acho.
"Bva kana zvakadaro chiregai ndibike. Aiwa handidi kuti ubike ndinoda iroro remasikati sezvaranga riri. Mukadzi ndokuchitanga kubikwa nechitiripo uyezve netambo yemagetsi," narrated Jonathan Gonese, the Gonese village head who rushed the victim to Chatsworth police and later to the clinic for treatment.
The woman, identified as Charity, was badly injured such that she could not walk and her body was severely bruised as a result of the savage assault but she is now back home, fully recovered and 'ready to move on for the sake of the children'.
On August 21, the Gutu Magistrates Court sentenced Chikoto to three months hard labour after finding him guilty on charges of domestic violence or assault with intent to cause grievous bodily harm.
This story is just but a tip of the iceberg, a drop in the ocean of many other cases that the courts are handling every day; stories that newspapers are almost finding to be no longer 'that newsworthy'.
Entrepreneur and women empowerment activist, Angeline Mikiri is of the opinion that abused women are largely conscious of their circumstances, and would opt out if only they had the means to look after themselves.
"Sometimes, women have no choice but to just stay there because they do not have their own sources of income. A woman just hangs on there and this seems to be most pronounced in rural areas where incomes per capita are lower, making the presence of a man in a woman's life all the more important," said Mikiri.
"However, some women stay in those marriages simply to live up to the gendered roles expected of them by society. Kuti ndingonzi ndakaroorwa chero pasina rudo.
"Remember, our culture still attaches tags to women who leave their men; many stereotypes are involved for example being labelled morally lose. But if a woman is economically-empowered and has access to information, she knows better," said Mikiri.
Local cleric and president of the Christian Voice International Zimbabwe (CVI-Z) Reverend Tapfumaneyi Zenda sees poverty as a double-edged sword that can cut to pieces a man's compassion while, at the same time, severing a woman's capability to escape violence.
"You have men who feel disempowered by the rough economy and they decide to take out their frustration on women just to prove a point; a mistaken point for that matter," said Rev Zenda.
At the centre of this view is the idea that if a man feels that he has failed to live up to the normative role expectations associated with his gender – that of sufficiently providing for the family – his ego is dented and the inclination to commit violence against women becomes acute.
"It is in light of this that the need to campaign vigorously against such attitudes becomes an obligation for all sections of society including churches. I fancy a world where women like Charity are empowered so that their husbands do not treat them as charity cases with no choice," said Rev Zenda.
Gender-based violence (GBV) is the general term used to capture violence that occurs as a result of the normative role expectations associated with each gender, along with the unequal power relationships between the two genders, within the context of a specific society. (Bloom 2008, p14).local
Share !