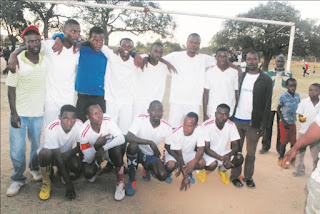 ZAKA – Runyange Football Club lifted Mutumba Trophy after beating Ndanga Football Club with a goal to nil in the finals held at Mutimwi High School on Sunday.
In the women category, Chando were crowned champions after beating Chivata in the finals while Chinounye came third.
The tournament is sponsored by Zaka Rural District Council (RDC) Ward 4 councillor and businessman Fanuel Tichaurawa, who is popularly known as Mutumba.
The competitions were graced by many people, among them Nicholas Mambanje, a lecturer at Morgenster Teachers' College Nicholas Mambanje, who holds a Zimbabwe Football Association (Zifa) level 1-4 and Confederation of African Football (CAF) C licence.
Runyange dismissed Rwonzi Stars with a goal to nil in the quarter finals before defeating Ndanga Royal Trophy holders, Chinounye Stars FC, with the same margin.
Ndanga FC had secured their ticket to the finals after beating Rusakazara 3-0 in the quarter finals before dismissing Sagope 4-2 in penalty shootouts after their match in the semis had ended with a nil all draw.
Interestingly, last year's champions Bush Walkers FC were knocked-out in the group stages.
Runyange captain, Wiseman Gwendere was pleased with the win which he said had come as a result of hard work.
"We won because of team work. We worked hard and we exploited our home advantage in the presence of many of our fans who supported us immensely.
On his part, Mutumba said he had been sponsoring the tournament since 1995 and was happy to continue making his contribution to community development through sports.
"I am happy that this trophy is making a difference. This is the 22nd edition of the trophy and many people have been taken to bigger teams after they had proved their talents here," said Tichaurawa.sport
Share !