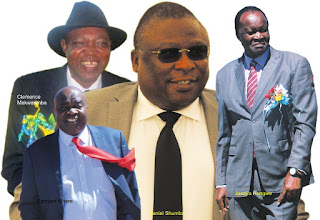 Hungwe bares it all

MASVINGO – Zanu PF heavyweights from Masvingo province have started jostling for the position of the late national heroine Minister of State for Provincial Affairs Shuvai Ben Mahofa, with Team Lacoste faction, which supports Vice President Emmerson Mnangagwa to take over from President Robert Mugabe leading the race.
Though some local political punters say it is Bikita district's turn to hold the office considering that districts rotate, it is very unlikely that the eastern district would get a chance.
Pyschomotor minister Josaya Hungwe, who is touted as the acting Minister of State since Mahofa's death by Lacoste faction, has distanced self and said only Mugabe has the prerogative to appoint an acting minister.
"Of course I am the most senior Zanu PF member in Masvingo province but I am not the acting minister of State. President Mugabe is the one who will appoint both an acting or substantive minister. I have heard a lot of talk about me being the acting minister since Shuvai Mahofa died but, please, I am not," said Hungwe.
However, if Mugabe decides to appoint an acting minister, he does not have many options as there is only Hungwe and Minister of Tourism Walter Mzembi.
Sources in Zanu PF also said a new Minister of State is supposed to come from Bikita if proper appointing channel is followed.
"You may be aware that the districts rotate; Gutu took over after Mwenezi so it is now Bikita's turn. But this is under normal circumstances and I would want to believe that the situation in Zanu PF at the moment is far from being normal therefore, President Mugabe might appoint anyone from any district," said a senior Zanu PF official in the province.
Given the chance, Bikita has a wide range to choose from with Rtd Major-General Gilbert Mashingaidze, Jeppy Jaboon (Bikita South MP) and former Police Senior Assistant Commission Edmore Veterai all potential candidates.
Team Lacoste, however, says President Mugabe has only three options to pick from, that is, Clemence Makwarimba (Senator), Zanu PF chief whip Lovemore Matuke (Gutu Central MP) and Edmund Mhere (Masvingo Central MP).
The above-mentioned are believed to be Lacoste faction kingpins in the province.
When pressed to comment on who is the best candidate for the post, Hungwe said being the most senior member does not give him the privilege to influence Mugabe.
"Being the most senior member of the party in Masvingo does not give me the power to say who the best candidate is; it is President Mugabe who will choose the most suitable. I will only contribute if I'm consulted," Hungwe said.
Hungwe is alleged to be a Team Lacoste sympathiser and has on many occasions helped the late Mahofa execute her duties when she was ill.
Even though he has refused to pick out his choice to succeed Mahofa, Hungwe has on many occasions shown his keen interest in having Matuke, Makwarimba, Mhere and Chadzamira in his inner circle.
Another Lacoste faction bigwig expressed confidence that Mugabe would choose Mahofa's successor from either Matuke, Makwarimba or Mhere.
"The post of resident minister rotates among all the province's seven districts and the passing on of Mahofa means it is now Bikita's turn but I don't see the President following that pattern.
"The President has three names to pick from if he wants to appoint a resident minister and only two if he wants to appoint an acting minister.
"Makwarimba, Matuke and Mhere are the most suitable candidates for the office but Makwarimba is first on the list," said the source.
If Mugabe chooses to pick from Masvingo Urban district, Daniel Shumba will be in line as he is the most senior member in the district.topnews
Share !