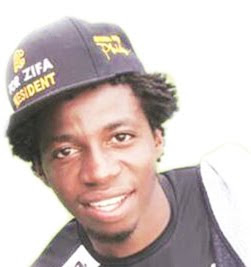 ZVISHAVANE - Rising defending midfielder Gerald Takwara looks set to leave the country for the ABSA Premiership after impressing in the trials at Ajax Cape Town, and negotiations are said to be going on well.
Takwara has been on the radar of many South African clubs and he missed the last two league matches as he was undergoing assessment at the Urban Warriors.
The 23-year old player emerged as one of the rising stars in the country while he was playing for Tsholotsho FC before moving to FC Platinum in July 2015. He was the nucleus of Zimbabwe's midfield during the Warriors' successful Cosafa campaign held in South Africa in July.
FC Platinum spokesperson Chido Chizondo confirmed that they were willing to let go of one of their best players provided a lucrative deal is placed on the table by Ajax Cape Town who are said to have been impressed by the player's elegant displays.
"We have opened negotiations with Ajax after they assessed him and they are convinced they want his services. We value him very much so he might go or he might not go," said Chizondo.
Pure Platinum have already lost two of their top players to South African teams with Talent Chawapiwa, who joined Baroka FC last month on a three-year deal, being the latest.
Chawapiwa caught the eyes of the South Africans with his good performance at Cosafa while Walter Musona joined Polokwane City earlier on during the January transfer window.
Takwara missed what could possibly have been his last match for the platinum miners when they won 1-0 against Triangle FC at Gibbo Stadium last weekend.sport
Share !