Home » Local » Women breaking barriers - ‘Being a woman is no obstacle’

Women breaking barriers - ‘Being a woman is no obstacle’ 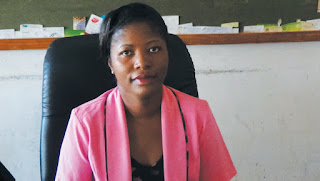 For Nancy Chatikobo, the Zaka Rural District Council executive officer for human resources (HR) and administration, being a woman should not be a barrier but an advantage since women have all that it takes to perform just as efficiently as their male counterparts or even better.
When she joined Zaka RDC, Chatikobo became the first female to hold that position at the local authority and she has distinguished herself in that role.
On many occasions, she has also acted as council Chief Executive Officer (CEO) in the absence of substantive CEO David Majaura.
Her duty as the head of administration at the council is to ensure the welfare of workers and councillors, a role that had always seemed to be a preserve of men.
Under her leadership, the HR committee recently passed a resolution that the local authority should buy smartphones its councillors in order to improve communication for the sake of service delivery.
Chatikobo describes herself as a goal getter and she believes women can overcome any supposed limitation by working hard and by refusing to wallow in self-pity while expecting cheap sympathy simply because they are women.
"My womanhood is by no means a limitation or hindrance when it comes to tasks that need to be performed and goals that need to be achieved. For affirmative action to be a success, women should measure up to expectation. I don't believe women should get favours just because they are women," said Chatikobo.
On the exercise of authority, Chatikobo says subordinates should feel that they are part of a collective and that their contributions and efforts are valuable.
"I believe in teamwork and the importance of individual participation in the building and attainment of one common vision. An organisation cannot be moved forward by one person no matter how strategically positioned and how influential that position could be. You need the input of everybody and you need to make your juniors see that their efforts are being acknowledged," Chatikobo said.
At her workplace, she says, her subordinates respect her because she treats them as brothers and sisters who understand what needs to be.
"I believe that the most effective way of enforcing compliance is not necessarily the code of conduct but the establishment of a mutual two-way communication process to emphasise the importance of our organisational principles. The code of conduct should be the last resort when everything else has failed," said Chatikobo.
Her advice for other women who are in similar high-pressure jobs is that tasks must be evenly delegated among the available human resources. All tasks, she says, should be scheduled and diarised, with priority being given to more critical matters so that deadlines and targets are never missed.
A holder of many professional certificates, the soft-spoken Chatikobo did her advanced level education at Daramombe Mission in Chivhu before studying for a Psychology Degree with the University of Zimbabwe (UZ).
She also has a Master's degree in Public Administration from the National University of Science and Technology (NUST) as well as a diploma in Personal Management.
Chatikobo has vast experience in public administration; having been assistant District Administrator (DA) of Uzumba Maramba Pfungwe (UMP) where she worked to bring fixed and mobile phone network services.
At the moment, Chatikobo has many other commitments as she sits on the boards of Chiredzi Sub-catchment Council and Runde Catchment Council as a representative of local authorities.local
Share !