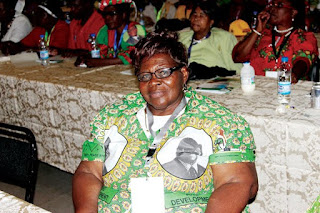 CHIREDZI - Zanu PF supporters in Chiredzi are disappointed that they could not travel to Harare for the burial of late Minister of State for Masvingo Provincial Affairs, Shuvai Mahofa last week after the party's provincial office failed to honour its promise to provide transport.
Party supporters told TellZim News that the provincial office had promised to send a bus to pick up mourners at the District Administrator (DA)'s office and at Chitsanga Hall but that did not happen.
One Zanu PF supporter said people were stranded at the two pick-up points and they later dispersed after all attempts to get in touch with the organising team failed.
"People were informed at a gathering that the province was sending buses to different places and that people from Chiredzi were to be picked at Chitsanga Hall as usual but we later dispersed in the afternoon after noticing that nothing was materialising," said the party supporter.
When contacted for comment the provincial secretary for administration Ailes Baloyi confirmed that the bus which was supposed to ferry the party's supporters did not show up.
"Indeed, I received a report that the bus which was supposed to transport the supporters from Chiredzi to the National Heroes Acre did not come. I was later advised there was a breakdown in Jerera leading to the abandonment of the trip," said Baloyi.
Provincial chairperson Ezra Chadzamira said he was disappointed that the many dedicated party cadres who wanted to mourn Mahofa had been let down.
"Two buses came to ferry the people but it was already too late so only a handful managed to travel to the National Heroes Acre," Chadzamira said.local,politics
Share !