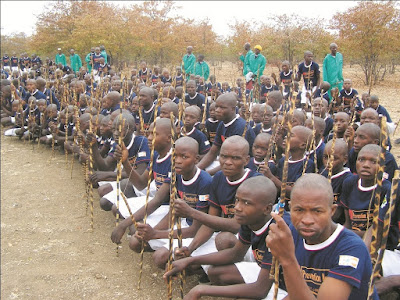 CHIREDZI - Members of the Zion Christian Church (ZCC) were last Sunday brutalised by circumcision initiates camped at Chengule, Headman Ngwenyeni under Chief Sengwe in Malipati, for allegedly disturbing proceedings at the camp through their 'noisy' drums.
Sources said the congregants were busy with their weekly church service when the nearby circumcision camp erupted in fury and overran the congregation; attacking the worshippers and forcing them to scatter, with two of them said to have sustained some facial injuries.
The matter was reported to Chikombedzi police but there were no arrests made by the time of writing.
Chairperson of the Sengwe Pastors Fraternity, Reverend Steve Chauke confirmed the brawl and said the attack could be connected to the simmering tensions between one Elder Mbiza of the ZCC congregation and Headman Ngwenyeni.
"Headman Ngwenyeni was not happy with Elder Mbiza whom he accused of refusing to help his (the headman's) son with provisions that are required for one to join the circumcision camp. It is said the boy so desperately wanted to join the camp such that, out of frustration, he attacked his father with a brick and ran away.
"I was then shocked last Sunday when one church member (name supplied) called me saying they had been attacked and beaten by the initiates. We then approached some traditional leaders in the community but they all seemed unwilling to talk to us so we consulted our lawyers who advised us to report the matter to the police," said Chauke.
When contacted for comment, Headman Ngwenyeni confirmed that people were beaten but denied than he harbours a grudge against Elder Mbiza.
"It's an order given by our chief that whenever these cultural processes begin, nobody should play anything; not a radio not a drum. Saka vechechi ivava vakatoita musikanzwa asi tiri kutotsvagawo mazita evakavarova vacho," said Head Ngwenyeni.
Speaking to TellZim News earlier on, a church member said the initiates were accusing them of 'noisy singing and drumming' thereby disturbing proceedings in the camp and much to the annoyance of the initiates.
"They came and surrounded us. They tried to grab a drum from the boy who was playing it but he managed run away. One of our female church members who tried to protect the drum was beaten hard by one of the boys," said the church member.
Another female victim said the band of boys were armed with sjamboks which they used to indiscriminately attack the worshippers, including a 14-year-old drummer.
The Shangani people consider their highly secretive traditional circumcision rites as sacred, meriting the respect of all outsiders.local
Share !