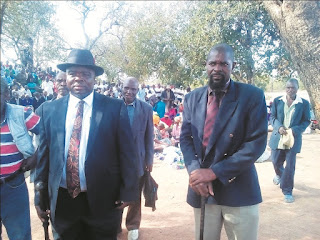 Clemence Madzingo and his officials

CHIREDZI – Clemence Madzingo, the Zvimba Rural District Council (RDC) Ward 14 councillor, seems to have won a protracted inter-family wrangle to the revived Neromwe throne after the Romwe clan recommended him to the Provincial Chiefs' Council last week.
Deliberations that happened at Masimbaevanhu Primary School, in the presence of the provincial chiefs' council led by Chief Serima, pointed to the former police detective taking the reins soon.
"We have been sent by the government to resuscitate the Neromwe chieftainship. We are not here to appoint a chief but to get a nominee. You had a grace period to discuss over who will take over," said Chief Serima.
The Romwe clan, represented Joseph Matumba, told the council that Madzingo should be their chief.
"We discussed the issue and reached the consensus that the chieftainship should be returned to Chanyururwa family," said Matumba.
The event was, however, not without drama as a clan elder, Bernard Murumbi, who stood to make submissions on behalf of Madzingo's rivals in the Kurera family, suddenly collapsed and was whisked away, leading to an increase in suspicions that juju was being used to win the throne.
The new chief-to-be, however, faces hurdles in the form of a legal challenge against the legitimacy of the chieftaincy which has been carved out of the existing Chief Tshovani's area.
Chief Tshovani is not happy because has lost wards 17, 26, 28 and 29 to the new chieftaincy, leaving him with only three wards.
Madzingo staked his claim to the chieftainship ahead of other aspirants within the Chanyururwa and Kurera royal families.
The Neromwe chieftaincy became extinct in 1908 when its land, which lies between Chiredzi River to the east, Mutirikwi and Runde River to the south and west as well as Musiwidzi River to the north, was seized and declared a European area.top news