Afr-I-CAN in Me embarks on mental illness awareness campaign 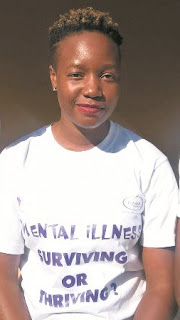 ZVISHAVANE - Mental health advocacy group Afr-I-CAN in Me has embarked on a project called The Mental Illness Rainbow Awareness Project as part of its wider efforts to bring awareness on mental health challenges.
Afr-I-CAN in Me director Ropa Mzari said although the project started in July, interest among stakeholders was rapidly growing as people were now keener than before to explore the subject which for long had been shrouded in superstitions.
"For each month, there is a selected theme and colour to help spread awareness. Awareness ribbons, hats, beanies, T-shirts and ties can all be used in this awareness project. We are currently running with the theme, 'Self-Injury Awareness' which is regarded as another form of a mental illness," Mzari told TellZim News.
She said self-injury referred to self-inflicted harm that people may do on their own bodies but without any suicidal intentions.
"Some people injure themselves by severe scratching, burning themselves, hair-pulling, self-poisoning and bruising. Most of these are done on areas of the body that can be easily hidden, but some people do it on parts that are visible to everyone.
"It is important to be on the look-out for people who get involved in this behavior as they could do more damage to their bodies. Treatment can be sought from psychologists.
"Alongside the theme for each month, we continue with the "Stigma Must Fall" theme because there is still a lot that society needs to learn and know concerning mental illnesses although of late there has been more open talk about mental illnesses," Mzari said.
She encouraged churches, schools, non-profit organisations and the general public to help people living with mental health challenges and support the awareness campaign.local
Share !