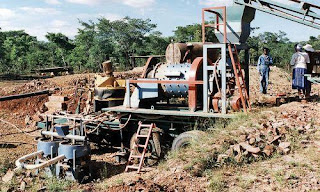 Some of the equipment at C-Mine

MBERENGWA - Troubled C-Mine ex-employees in Mberengwa have called upon the government to intervene in the impasse between them and their former employer over unpaid dues.
The gold mine changed ownership 10 years ago and went under liquidation after the then owner Patrick Down relocated to Canada leaving more than 300 workers with unpaid packages.
The hopes for the workers to get any form of their outstanding remuneration were shattered when all of the company's movable property was sold, leaving the former workers with nothing to get hold of as a form of payment for the services they rendered to their former employer.
"We are calling upon the government to come to our rescue. There is no other avenue we can use to get our packages now that the assets we were holding onto as collateral are being sold," said a dejected ex-worker.
Over the years, a number of mines in the Great Dyke have been closed leaving many workers stranded and with nowhere to go. Some former workers were chucked out of mine houses that they have been staying before the collapse of the mining businesses.local
Share !