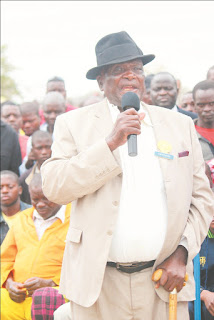 CHIREDZI - Chief Tshovani last week launched the Tshovani Day which is hoped will help avoid succession disputes while reuniting clansmen living in both Zimbabwe and South Africa.
Tshovani Day was launched on the September 24 at Chief Tshovani's homestead in Chiredzi where all the five families of the Tshovani clan were gathered.
Chief Tshovani admitted that succession disputes were a headache for all chiefs therefore it was prudent that he and his kinsmen work to avoid that.
He also said the reunion was a huge step to solidify family bonds of the Tshovani bloodline while resuscitating critical elements of Xangani culture which he said was under attack from outside influences.
"This day is going to help us as a clan to shun succession disputes as each member will get to know the chieftainship hierarchy. There are many problems involving juju in some chiefdoms as people often fight over succession so we want to avoid that in our clan.
"Our family members in South Africa lost some of their cultural values and this day will help them learn the culture they have lost over the years," said Chief Tshovani.
Chief Hlomela of Giyani in South Africa, who is a Tshovani kinsman, said he was happy to reunite with his extended family members since the passing away of their ancestors.
He also said they migrated to South Africa as while running away from wars in Zimbabwe a long time back.
"Tshovani Day has reunited us with our family members in Zimbabwe and we have to regain our lost culture and bonds. We are planning to celebrate the next Tshovani Day in Hlomela Village, South Africa," said Chief Hlomela.
Chiredzi East Member of Parliament, Denford Masiya, who is also a member of the family, said they had chosen September which Zimbabwe declared culture and heritage month, and being the month in which Heritage Day is celebrated in South Africa.
"We are here gathered today at Tshovani homestead to reunite with our family members from South Africa. We have managed to utilise the culture and heritage month as declared by the government of Zimbabwe while incorporating it with Heritage Day in South Africa," said Masiya.
Share !