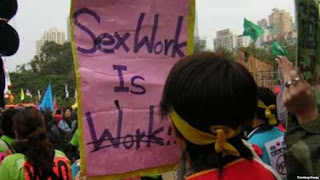 ZVISHAVANE - The economic challenges in the mining town have spawned unprecedented levels of desperation, leading to some children dropping out of schools to take up commercial sex work.
Night clubs and bars have become havens for these nocturnal activities, by which young girls, some as young as 13, can be seen soliciting for paid sex from as early as 19:00 hrs.
In high density suburbs like Mandava, main shopping centres are a hive of activity in the evenings, with young girls hooking up with men old enough to be their fathers.
One girl who agreed to talk to TellZim News narrated her ordeal saying circumstances forced her to dropout out of school to take up commercial sex work.
"I live with my grandmother and my little brother. My parents died when I was barely 8, and I dropped out of school and started selling my body to cater for our needs because nobody was there to help us," the 15-year-old said.
Since the ruling by the Constitutional Court outlawing arbitrary arrest of women on allegations of asking for sex, arrests of suspected sex workers loitering on the streets seem to have stopped.
This has however caused an increase in young sex workers who are being seen in the company of seniors in the profession.
TellZim News has learnt that older commercial sex workers use these young 'fresh' school drop-outs to lure customers.
In return, the young girls are guaranteed protection and access to places where underage children are normally barred.local
Share !