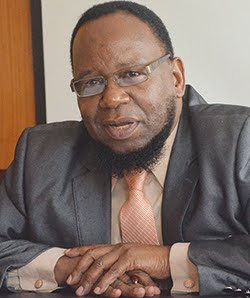 …as he threatens, forces heads to chant Zanu PF slogan
. . . school heads forced to wear uniforms
. . .Expo was mere fund-raising as over $1m was collected

MASVINGO - There is a groundswell of anger and discontent among some school heads in Masvingo province over the move by the Ministry of Primary and Secondary Education to frog march them to Harare for the Education and Conference Expo 2017 a fortnight ago where each school was forced to pay US$115 towards the event.
School heads who spoke to TellZim News said they were threatened that failure to attend the expo or pay the required money would result in them losing their jobs.
Speaking on condition of anonymity, the school heads said the expo accounted for nothing professional but their utter humiliation as they were treated like yoked animals.
"The event was poorly organised and out of the blue, we were forced to chuck out $100 as affiliation fee while the other $15 was for the mandatory uniform. There are about over 9 000 schools in the country and that means over a $1m was collected.
"They threatened that if we did not comply with the directive, it was as good as saying we were no longer interested in our jobs. As a result, we all trembled in fear and flocked to Harare where over 7000 heads timidly gathered," said one school head.
Other school heads came out guns blazing against the controversial Education minister Lazarus Dokora whom they accused of using desperate means to prove a point to President Mugabe that he can command teachers and school heads to vote for the nonagenarian in the 2018 general elections.
They accused him of using arm-twisting tactics to make it appear like he had enormous political capital so as to curry favour with the nonagenarian.
"Dokora only wanted to show the President that he had power over us and when he pulls the strings, we all jump. Imagine out of the 9 000 schools in the country each paying $115. Over a million dollars was made but how it was used we have no idea.
"We were forced to chant Zanu PF slogans and scream 'Gushungo, Gushungo, Gushungo' while the President was making his way into the venue," fumed another head.
The school heads also said they were not happy with the uniforms they were forced to wear, claiming most of the garments were ill-fitting.
"We are professionals and should not be treated as such. Nothing beneficial was said at the expo and you would feel sorry for many other colleagues who were wearing either oversized or extremely tight uniforms.
"How can you call someone from Korea to address us on issues that affect us here in Zimbabwe? They just gave us motivational speeches which do not help at all in our professional ethics," another school head said.
Progressive Teachers' Union of Zimbabwe (PTUZ) president Dr Takavafira Zhou dismissed the expo as a circus by which Zanu PF was trying to use to make schools their appendages.
"This was supposed to be an education expo but it turned out to be a Zanu PF rally where headmasters were forced to chant slogans.
"The headmasters were not given a chance to talk about the problems in their schools but were merely told what to do. Dokora should sober up and listen to the voices of reason than to reduce our school heads to kindergarten children.
"He should know that intelligence does not come merely by occupying a higher office. He should know that in order to introduce meaningful reforms, there should be meaningful engagements. They do not have money to fund their so-called new curriculum and they want to bleed schools out," said Dr Zhou.
Dokora could not be reached for comment by the time of going to press.top news
Share !