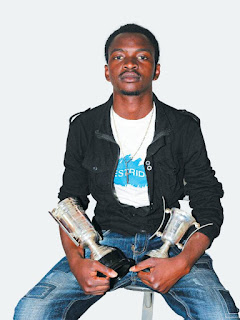 MASVINGO - The 29th edition of the National One Act Play Festival held at Charles Austin Theatre on September 2 left local theatre artists with a lot to be proud of after Donovan Takaendesa, one of the most outstanding of all budding artists, scooped two awards.
The National One Act Play Festival is held annually in various theatre venues across the country, and it is regarded as one of the biggest event of the national theatre arts calendar.
At Charles Austin Theatre, Takaendesa, who is best known by his stage name Don Claude, bagged the Best Comio as well as the Best Supporting Actor awards for his role in Paradox.
Produced by Masvingo Arts and Theatre Club, Paradox also captivated its audiences and won two awards namely Best Production and Best Technical Play. Its director Samantha Gurira also won the Best Director award in recognition of the remarkable show of talent apparent in the play.
The awards meant that the play came ahead of many works by other theatre clubs like the Midlands State University (MSU) which came out second and Harare's Place Reps Theatre which came out third.
Speaking to TellZim News, Takaendesa said he was humbled by the recognition which he said came as a result of the collective effort and hard work of Masvingo Arts and Theatre Club.
"That was a highlight of in my young theatre arts career and I was really happy and humbled by those awards. I however, owe all gratitude to the amazing team that I work with at the club. They really worked hard to make sure we get this recognition and my hope is that we continue along that path," said Takaendesa.entertainment
Share !