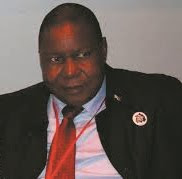 Dr Silvester Maunganidze seems to be eyeing Mwenezi West constituency in the 2018 general elections having failed dismally in Chivi South in the previous election.
The educated politician fell out of President Robert Mugabe's favour and was relegated to the permanent secretaries' pool after serving exceptionally well under various ministries including in the tourism ministry.
The fallout, I would want to believe, was more to do with crossing Mugabe's path than incompetence because Dr Maunganidze was among the best permanent secretaries. In fact, he is far much better than some of the secretaries who are still serving in various ministries.
It has become an open secret that anyone who attempts to cross Mugabe's path always gets a heavy punishment. The likes of Rugare Gumbo, Didymus Mutasa and Joice Mujuru can bear testimony to that.
But the Chivi-born politician is aiming to revive his political career in Mwenezi West where he is said to own a farm. Though it will definitely not be a stroll in the park for him considering the calibre of other candidates who are also readying themselves for the seat, Dr Maunganidze is said to be making inroads by engaging local traditional leadership among them village heads and chiefs.
He is also said to be implementing some developmental projects at few primary schools in the constituency, a move which endeared him with part of the electorate.
A win at Zanu PF primaries will obviously be the gateway to the national assembly considering how weak or dead the opposition is in Mwenezi West.  But the question remains, is Dr Maunganidze going to make it?
Dr Maunganidze has to face the incumbent Lamson Matavire who is said to be eyeing a second term. Matavire might be losing grip in the constituency but still controlling some Zanu PF structures and that alone cannot be underrated.
The electorate might burst that they no longer want him for allegedly failing to implement most of the projects he promised in the run-up to the July 31, 2013 harmonised elections but that should not excite Dr Maunganidze because the electorate can swing any time.
Matavire still controls some few wards in the constituency and that gives him an advantage if he starts preparing for the party primaries scheduled for next year now. However, it would be difficult for him to reconnect with part of the electorate which has already shown him the red card as they are already de-campaigning him and urging others to support Dr Maunganidze.
Another party member, Tafadzwa Shumba is also interested in the constituency. The Zanu PF central committee member lost to Matavire in the previous election and, it appears, he is tying all the loose ends this time around. Being resident in Mwenezi West most of the time, Shumba stands a better chance but probably what he lacks is political stamina to give that killer punch.
He does the ground work very well but it seems he gets tired, in most cases, before he crosses the finishing line. Therefore, Shumba needs endurance and he needs to start campaigning early in a manner that will last the test of time.  Maybe, his biggest challenge is that he does not have enough resources compared to other candidates.
More other names are being put in the ring but for now the trio seems to be the most pronounced among the bunch and any one of them can win the Zanu PF primaries if they play their political chess game well.
No other candidates have so far emerged from opposition parties including the Morgan Tsvangirai-led Movement for Democratic Change (MDC-T) and a ragtag of other opposition parties that exist in the country.politics
Share !