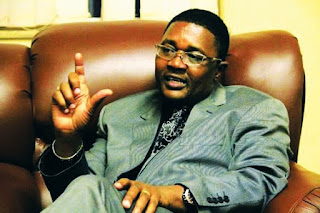 Walter Mzembi might be one of the best ministers in the country but back to his constituency, four candidates are already pushing for his ouster, accusing him of neglecting Masvingo South in as far as development is concerned.
The Tourism minister is believed to be President Robert Mugabe's blue-eyed boy in Masvingo therefore, untouchable but three candidates seem to have defied him and are readying themselves for Zanu PF primary elections.
Victor Gugwe from Muchibwa area who also hails from the same ward 23 with Mzembi is said to be ready to take the incumbent legislator head on, while Tokwane Ngundu Primary School teacher Gladys Chari too is reported to be making inroads ahead of the primaries.
Not to be outdone is Claudious Maronge who is the deputy school head at Makumbe Primary School as he is also reported to be eyeing Masvingo South on a Zanu PF ticket.
The trio is said to be so determined to remove Mzembi whom they accuse of neglecting the constituency soon after he was elected into office on July 31, 2013. Among the promised projects is the construction of doctor's house at Jena district hospital and the repairing of Tetenu Bridge which links Ward 23 and 25. These proposed projects have never seen the light of the day despite being prominent projects to talk about.
But does the trio have the stamina to push Mzembi out? Mzembi, being one of Mugabe's best ministers, gives him a big advantage, not mentioning his international exposure especially now that he campaigned and lost the race to be secretary general of the United Nations World Tourism Organisation (UNWTO).
Mzembi's dilemma, however, is that Masvingo South is a rural constituency and his international exposure would help more if he was contesting an urban constituency. Probably that is the reason there are suggestions that he might contest for the Harare Central constituency in the 2018 general elections.
Mzembi is still young and the international exposure would make him want to use new technologies for campaigning; for instance use of social media and streets advertising using big screens, which is not appropriate for a rural constituency.
He has enough resources to also cater for Masvingo South electorate in the event that he decides to contest there; maybe few maize seeds and fertilisers from the presidential inputs scheme would be enough for him to win the hearts of some disgruntled villagers ahead of the primaries.
Mzembi, however, is likely to face Gurwe who is believed to be a Central Intelligence (CIO) operative. The suspected CIO agent might take advantage of the youths especially considering his age. He is younger than Mzembi and seems to be in a better position to understand the plight of the youths better than the tourism minister who will be seeking re-election for a third term.
After losing dismally at 2013 primary elections for Ward 30 to Sungano Matakanure, who is the wife of Mzembi's constituency coordinator Joshua Matakanure, Gladys Chari has never stopped being ambitious and she is now challenging Mzembi for the National Assembly seat.
The only advantage Chari would have is that Team Lacoste faction might support her to take the constituency in the event that Mzembi decides to contest for the Harare Central seat.
Maronge is hardly known in the constituency; even in his own ward and that means he has a daunting task ahead if he is really serious about contesting for the national assembly seat. Running a primary school and being a constituency representative in parliament are obviously two different tasks with the later proving to be more difficult.
The winner from Zanu PF primaries will then face candidates from opposition parties like the National Constitution Assembly (NCA), which has developed a habit of fielding candidates everywhere including where the party is completely not known.
Movement for Democratic Change (MDC-T) is likely to be represented by Lovemore Matongo. Though he is not much popular, Matongo is obviously riding on the popularity of Isaac Matongo who was the first MDC national chairman.
Matongo's biggest challenge is that he is visible only towards elections and after that, he vanishes and this might affect his ambitions to represent Masvingo South in parliament.
Political experience and education
In terms of political experience Mzembi is more experienced of them all having been a minister for a decade. Mzembi is an engineer by profession. Though many people have doubted his doctorate (PhD) with some publicly calling upon him to make his thesis available, the Masvingo South legislator remains Dr Mzembi's territory and no one can take that away from him.
Mzembi took the constituency from his uncle Edison Zvobgo.
Gurwe is a holder of a degree in Political Administration from the University of Zimbawe (UZ) but has little traceable political history in Zanu PF.
Chari as a teacher by profession with at least a diploma in education. She has a bit of political experience though she has a record of losing elections. She is a provincial executive member thanks to Zanu PF's factional fights.politics
Share !