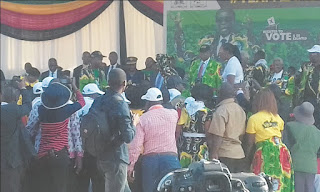 A scene at the youth interface rally in Gweru

…support from two provinces does not guarantee Mnangwagwa presidency

GWERU - First Lady Grace Mugabe last week lashed out at scores of Midlands Zanu PF supporters who attended the Presidential Youth Interface Rally held in Mkoba, Gweru, saying there was a lot of indiscipline among people from Midlands and Masvingo provinces.
Grace also said the two provinces, which are believed to be strong 'Team Lacoste' (a faction reportedly led by Vice-President Emerson Mnangagwa in the succession race) backyards, have no respect for her, her children and President Robert Mugabe.
As if to confirm that she is the power behind the rival G40 faction, Grace said Masvingo and Midlands provinces were not in support of her.
"We hear that coming from Midlands and Masvingo, muchitukirira mukuru wenyika, kutukirira mukadzi wake, kutukirira vana vake! I don't think that today I will be convinced that there is unity of purpose unless you are telling me that from today, you have changed and realised that factionalism does not work.
"You were even honoured that one of the Vice Presidents comes from Midlands. Do you want the president to regret why he took one of your own to work with him? I am telling all of you peddling factionalism that you stop it," Grace said.
This did not however stop the hordes of suspected Team Lacoste fanatics at the rally from displaying their support for Mnangagwa.
They first gave him thunderous cheers to welcome him on arrival and later gave him lively responses when he chanted the Zanu PF slogan.
"You have mentioned that in Midlands you are united and you have no factionalism. I hope you are telling the truth. If there is no factionalism, ahh that's now something new because the words we hear are not pleasing," Grace said.
She also made a veiled threat against Mnangagwa saying nobody should think they can be president simply because they have the approval of one or two provinces.
"You can apply for any other job not this one of being president. Having approval of one or two provinces does not make you eligible to be president. You have to be approved by all the 10 provinces.
"If you go around telling people that you will be president and talking bad about President Mugabe, bad things will happen to you then you will be saying President Mugabe and his wife have bewitched you when we are actually God fearing. So I say stop it forthwith!" she thundered.
Meanwhile, dislike for the G40 faction in the Midlands province has become more apparent, with Zanu PF members openly chanting 'Pasi nepoison' slogans while party youths continue to sing perceived pro-Team Lacoste jingles at party meetings.top news
Share !