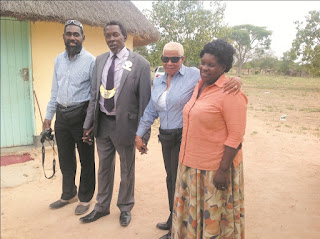 MPANDAWANA – Intractable land disputes and alleged politicisation threaten to derail a donor-funded medical centre in Mavhondo village under headman Gadzingo in Gutu, with some villagers complaining that the project is being done on land that was taken without their consent.
Many villagers in the area identify themselves as Lemba, an African ethnic group which claims connections to Semitic bloodlines.
Those who spoke to TellZim News said they were not happy because they were not consulted when their land was designated for the project.
The project is being funded by a Jamaican donor resident in the United States, Leonie Byran and her husband Milton both of whom reportedly also claim Jewish ancestry.
An affected villager who spoke on condition of anonymity said people who lost their land to the project deserve fair compensation.
"We were not consulted at all. The clinic was just pegged when some of us were away with work, only to come back and be told by our traditional leaders that our fields were no longer ours. We understand the project is important but we want to be paid for the land," the villager said.
Other villagers also complained that the project had been politicised by Gutu North Member of Parliament Tafara Madondo with the help of traditional leaders so as to advance his 2018 re-election bid.
Madondo, however, denied exploiting the project for political expediency saying his contributions to the success of the project was done in his capacity as MP.
"I am not of that nature. The donors approached me as MP and we held a meeting to see how we could all play our part to get the project succeed. We all worked hard to get the project approved by council and the donors are very happy with the work I have done so I don't know if there is anything wrong with that. It's common to hear such things when you approach elections," said Madondo.
TellZim News also managed to get hold of former Gutu North MP Maramwise Hamandishe who said some people indeed lost their land because of the project.
"There are genuine grievances there but we hope the project will continue. The problem is that there are some people who did not do their jobs properly. The donor was friends with my wife since way back so in 2012, when I was still MP, I engaged her and she was eager to build a clinic for Lemba people," said Hamandishe.
He said he then approached Chief Gutu who was receptive of the idea and the initial plans were to build the facility in Hamandishe village but it was later decided that the clinic be built in Mavhondo village where there was more suitable land.
"That is when we were then pushed aside by other people who wanted to benefit from the project implementation themselves and they did not consult the people. It's bad that there is so much enmity and confusion between the Mavhondo and Hamandishe families because of the project yet we the same people," said Hamandishe.
Hamandishe however refused to confirm reports that there was bad blood between him and his elder cousin brother and former Gutu Rural District Council (RDC) Ward 8 councillor, Vamaramba Hamandishe who is reportedly commandeering the project and using it to advance his bid to win back the ward in 2018.
No comment could be obtained from Vamaramba by the time of going to print.local
Share !