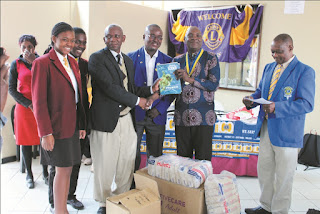 MASVINGO – A local chapter of Lion's Club, a humanitarian organisation with an international reach, was launched at Chevron Hotel last week.
The guest of honour at the launch was David Saunyama who is the first vice governor of district 412 (D412) which comprises four countries namely Zimbabwe, Botswana, Malawi and Mozambique.
The district also has a total of 153 clubs with 30 of them in Zimbabwe.
Saunyama told TellZim News that the organisation's presence in Masvingo put it in a better position to make a difference locally.
"The launch of the club here in Masvingo means we will be able to help at any time when we have resources. When we donate to the needy, we need to have our club members to do the handover so if an area has no members, it is difficult to stretch our hands," said Saunyama.
During the launch, Solarax Pvt Ltd donated foodstuffs and other goods to Mucheke Old People's Home, Ndarama High School and Pioneer Cottages children's shelter while Chiedza Muchandiona, a member of the club, donated to Alpha cottages and Pioneer Cottages.
The Lion's Club is a non-governmental voluntary organisation which helps the underprivileged and victims of disasters through fundraising work and partnerships with the corporate world.
The organisation provides grants, food and health care among other basic social needs.
It is headquartered in Chicago, America, and has 1.4 million members with 420 thousand clubs around the world.
Its junior club for young people below the age of 30 is called the Leo Club.
Great Zimbabwe University (GZU) has two Leo Clubs; one at the main campus and the other at Mashava campus.education,local
Share !