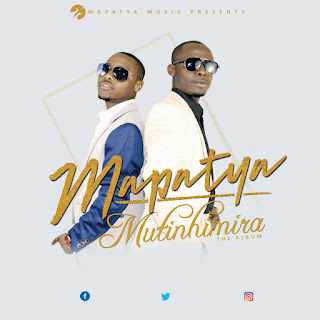 Masvingo – Afro Pop singers Mandeth and Kudakwashe Maunganidze, who go by their stage name Mapatya, last week Tuesday released their first eight-track album titled Mutinhimira.
The album consists of such tracks as the hit song Kokoko, Ndiriyo, Anondipa, Mutserendende.
The album has already been launched at Star Fm, Hevoi Fm, Power Fm, ZiFM and other radio stations.
The duo used to sing in church since they were young boys, allowing congregants to nominate songs that they wanted them to perform.
Speaking to TellZim News, the youthful artists said they were inspired by local Hip hop sensation Desmond Chideme (Stunner).
The two released their first single 'Zimba hustler' in 2012 but the track was not as successful as had been expected. This, however, did not dissuade the brothers who continued with their work, releasing many Hip hop and Afro Pop singles before their latest offer.
Kudakwashe said he looked forward to a collaboration with Amara Brown, Andy Muridzo, ExQ before yearend.
The duo also thanked the Military Touch Movement, Mount Zion and Cash Libs records for assisting them record and release their first album.
"We would like to thank our producers Dj Tamuka, Oskid and JP studios. We thank our parents for all the support they gave us to make this album possible. Special thanks also go to Masvingo as a community for the love and support they have for our music," said Kudakwashe.entertainment
Share !