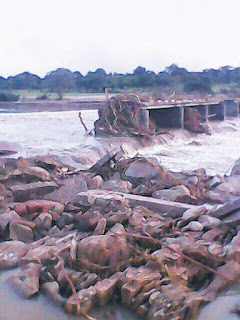 MBERENGWA – Many villagers in Chief Mtevaidzi are afraid their children will soon not be able to go to school at the onset of the rainy season as there is little hope that the collapsed Jeka Bridge across Mwenezi River will be repaired in time.
The bridge was swept away by Cyclone Dineo several months ago but government is yet to respond to the damage.
Villagers who spoke to TellZim News said they were afraid their children who go to Chegato High School across the river will miss school for several days in the rainy season as the bridge was likely to remain in a state of disrepair for a long time.
"It is now months since the bridge got swept away but the government has shown no interest in repairing it and we are approaching another rainy season. How will our children cross the river to school?" said one villager.
Other villagers from Zibanga and Mutsime said they too will not be able to travel across the river which usually gets flooded during the rainy season.
"We have to cross the river to reach most of the facilities we need for example Jeka Clinic, schools and business areas. It is already difficult to cross the river and it will be totally impossible to do so when the rains come," said another villager.
Mberengwa District Administrator (DA) White Nkoma said government was planning to construct a relief, temporary footbridge across the river.
"Government is working to raise funds to repair the bridge and a lot of money is needed for the reconstruction but soon, a temporary footbridge is going to be built," Nkoma said.
The footbridge, he said, would offer temporary relief as funds for the reconstruction of the proper bridge are mobilised.local
Share !