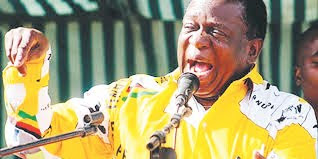 MASVINGO - Vice President Emmerson Mnangagwa, who reportedly leads a faction known as Team Lacoste in the race to succeed the nonagenarian President Robert Mugabe, seems to have mastered the concept of silence very well, much to the chagrin of his G40 political enemies.
Sources said Mnangagwa's enemies are angry that their flagrant provocation of the VP had failed to produce the desired reaction they had hoped to use against him.
The fight between Team Lacoste and rivals G40, which is allegedly led by Grace Mugabe, has opened up deep fissures within the ruling Zanu PF, cracks that have seen some party members being sacked while others continue to hang by the thread.
For the first time, the revolutionary party, Zanu PFwill have to pass the test of time by making sure that the revolution does not swallow all its children by the time the 2018 elections are held in a few months' time.
War veterans' top executive led by Christopher Mutsvangwa, who is an avowed Mnangwagwa supporter, was expelled from the party last year after criticising Mugabe.
Recently Energy Mutodi languished in prison for showing his unwavering support to Mnangagwa and was expelled from Zanu PF but Mnangagwa remained deafeningly silent.
G40 members have for long poked Mnangagwa in the face to try and expose him but being shrewd as he is, Mnangagwa has kept a level head, letting the 'dogs' continue barking.
At the recently held youth interface rally in Bindura, Mnangagwa was once again arm twisted but he did not scream.
The First Lady went on a rampage saying her own investigations into Zanu PF factionalism had found that only one faction going by the name Team Lacoste exists in the former liberation movement, but did not find anything by the name G40.
"Kubva 2014 kune vana wakawanda wakatanga kutukirira Baba neni Amai. Kuti yaiva strategy here yekuda kundisvibisa ndibve ndaora moyo ndibva ndati Baba chiregai muise vaMnangagwa nekuti vaishandisa zita ravaMnangagwa.
"Vana vazhinji vakadzingwa mumusangano. The youth are being expelled over indiscipline charges but how does the indiscipline come about. Vana vari kutuka vaMugabe vachiti wachembera chibva Mnangagwa apinde," Grace said at the rally.
She went on to say that if people insult the President using the name of Mnangagwa and he just keeps quiet, it becomes worrying.
Grace went all out to defend her alleged G40 poster boys; national commissar Saviour Kasukuwere and Professor Jonathan Moyo, exonerating them of any wrong doing.
Masvingo and Midlands provinces, which are believed to be the most obstinate Mnangagwa pillars of support, were also tongue lashed by the garrulous first lady.
At another youth interface rally in Gwanda earlier on, Mnangwagwa was allegedly poisoned by his G40 adversaries and was flown to neighbouring South Africa for treatment but upon his return, the nation stood up and took notice hoping Mnangagwa would make a statement but he never did.
One of his allies in Masvingo said Team Lacoste is not a creation of Mnangagwa but of the grassroots that have chosen him to lead them post Mugabe.
"Team Lacoste was not created by Mnangagwa but the people in the grassroots. The people believe he is better positioned to take over after Mugabe. His silence should not be misconstrued as cowardice.
"Mnangagwa is a chief strategist and when the time comes for him to open his mouth you will all see. For now, let the dogs bark and see if the elephant will be scared," said an ally who refused to be named for strategic reasons.top news
Share !