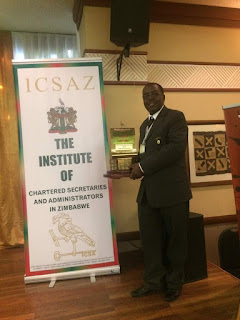 Prominent Masvingo businessman Pascal Mudzikisi, of the Mhukahuru Professionals, was last week declared the 2016 Chartered Secretary of the Year.
Mudzikisi managed to beat the runner up Joseph Bemani who is a Dean at Great Zimbabwe University (GZU) in the Munhumutapa School of Commerce.
He was crowned by the Institute of Chartered Secretaries and Administrators in Zimbabwe at the institute's annual conference banquet held in Victoria Falls.
Mudzikisi said he was deeply humbled by the accolade he received at such high level.
"It is a good thing to get recognised for the work you are doing. This means that someone somewhere appreciates what you are doing and it can never get any better. The pride of holding this award does not only end with me but the whole province. It inspires me to keep going and delivering," said Mudzikisi.
Mudzikisi prides himself of over four decades of experience in local government administration and finance with his main areas of expertise being finance, administration and entrepreneurship.
Mudzikisi offers accountancy services to businesses in Masvingo and he holds a number of civic positions in Masvingo.local,business
Share !